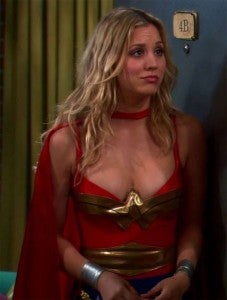 Kaley Cuoco certainly looks to be a rising star. The actress best known for playing Penny on The Big Bang Theory is hosting the People’s Choice Awards tonight, and she has also landed some major commercial gigs.

Jack Hollis, vice president of Toyota Division Marketing at Toyota Motor Sales, U.S.A., Inc., said “Not only are we pumped to have Kaley as part of our Super Bowl commercial, but we're also excited to give fans a chance to have their photo appear in a nationally televised Toyota spot during one of the biggest sporting events of the year. We look forward to sharing our commercial with the millions of viewers who tune in to watch the ultimate football showdown."

"When I saw the concept for the commercial, I knew it was something I wanted to do," said Cuoco. "I've had a great time filming and am excited to see the finished product."

For the "Get In The Big Game" promotion, fans can submit photos of themselves to Instagram or Twitter with the hashtag #wishgranted for a chance for their image to appear in Toyota's Super Bowl commercial on February 3. One photo will be selected and placed in the reveal of the commercial during the first quarter of the game. For official rules and more information about "Get In The Big Game," visit www.toyota.com/letsgoplaces/get-in-the-big-game.