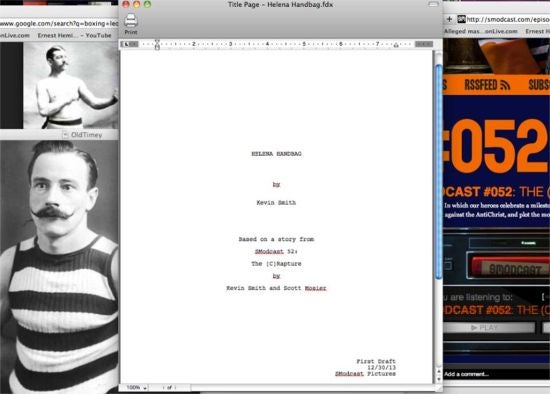 On Christmas Day, Comicbook.com was first to report that Kevin Smith had revealed plans to make a film featuring a giant Jesus Christ during his most recent smodcast. At the time, Smith hadn’t picked a name for the film, but he was considering a suggestion by fellow podcaster Scott Mosier to call it Christzilla. Smith challenged his fans to come up with a better name than Christzilla.

On Monday, Smith announced on Facebook that he had selected a name for his new film. Instead of going with Mosier’s suggestion or a fan suggestion, Smith has decided to call the film Helena Handbag, which is a name that comes directly from the plot of the film. Smith explained, “It's kind of a nod to David Lynch's unproduced One Saliva Bubble screenplay, too - which was also about the end of the world and also carried a title that didn't really prepare you for what the movie was about.”

In regards to what the movie is about, Smith wrote, “The plot of the movie concerns mankind teaming up with Hell to save existence from extinction at the hands of a Rapturing giant Jesus.”

Like his most recent movie Tusk, Smith plans to film Helena Handbag on a very small budget. Smith explained, “The budget has to be LOW, because NOBODY'S gonna wanna make that movie. At all. And I know this going in, so I won't be heartbroken if it never goes beyond the script.”