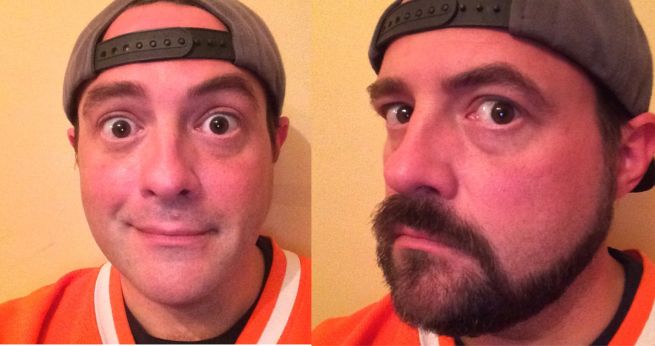 If a picture is worth a thousand words then this one speaks volumes.

Actor and director Kevin Smith shaved his trademark beard and posted a pic of the new look on Instagram.

Look at this goofy spaz. This is me, beardless, for the #YogaHosers green screen shoot. #FaceBrazilian

"Look at this goofy spaz. This is me, beardless, for the #YogaHosers green screen shoot. #FaceBrazilian" Smith stated on his account.

Yoga Hosers is an upcoming action-adventure film written and directed by Smith. The film is a spinoff of Smith's 2014 horror film Tusk. The film stars Johnny Depp alongside his daughter Lily-Rose Depp and Smith's daughter Harley Quinn Smith. The film is the second in Smith's True North Trilogy.

The film centers on 15-year-old yoga nuts Colleen Collette (Lily-Rose Depp) and Colleen McKenzie (Harley Quinn Smith), who have an after-school job at a Manitoba convenience store called Eh-2-Zed. When an ancient evil rises from beneath Canada’s crust and threatens their big invitation to a Grade 12 party, the Colleens join forces with a legendary man-hunter from Montreal named Guy Lapointe (Depp).

The film is scheduled to be released on June 2015.