So, Clerks turned 20 today, if you measure these things by the theatrical release date.

And it affected me significantly, both personally and professionally, which is why when I wrote a piece on it in the wee hours of the morning, I became distracted by minutae and had to scrap it and rewrite.

What's so special about this film? Well...

If you like the regular "Easter Eggs and comic book references" stories we run following airings of Arrow, The Flash, The Walking Dead and Marvel's Agents of S.H.I.E.L.D., you've got Kevin Smith and Clerks to thank on some level. In 1999 or 2000, writing for Wizard magazine, I wrote a piece that never saw publication connecting all of the various elements of Smith's "View Askewniverse" from Clerks through Dogma, which was then new in theaters.

In part, the story never ran due to space concerns; when I pitched the idea to an editor, it likely seemed like a neat concept for a 200-word sidebar feature. Instead, the final story weighed in around 2,000 words and included unlikely diatribes about things like hockey, Star Wars and John Hughes movies.

Yesterday, Yahoo! explained a little bit of this:

Ultimately, I published the piece on a now-defunct Angelfire website and, somehow, it came to the attention of then-webmaster Ming Chen, who linked to my page from the official View Askew website for years.

[Side note: Chen, who now appears on AMC's Comic Book Men, remembers this; we discussed it last week at Marvel's Avengers S.T.A.T.I.O.N. while we waited for the Secret Wars announcement. He says that because the site is rarely cleared, with improvements generally added onto the existing skeleton, that link is probably still in there someplace.]

That's the basis from which I started watching all these things for Easter eggs, references, winks and nods to other shows and comics. At first it wasn't even an assignment, just the kind of story I'd have wanted to read and thought would be fun to run...because I'd received so much positive feedback from Kevin Smith fans over the years. 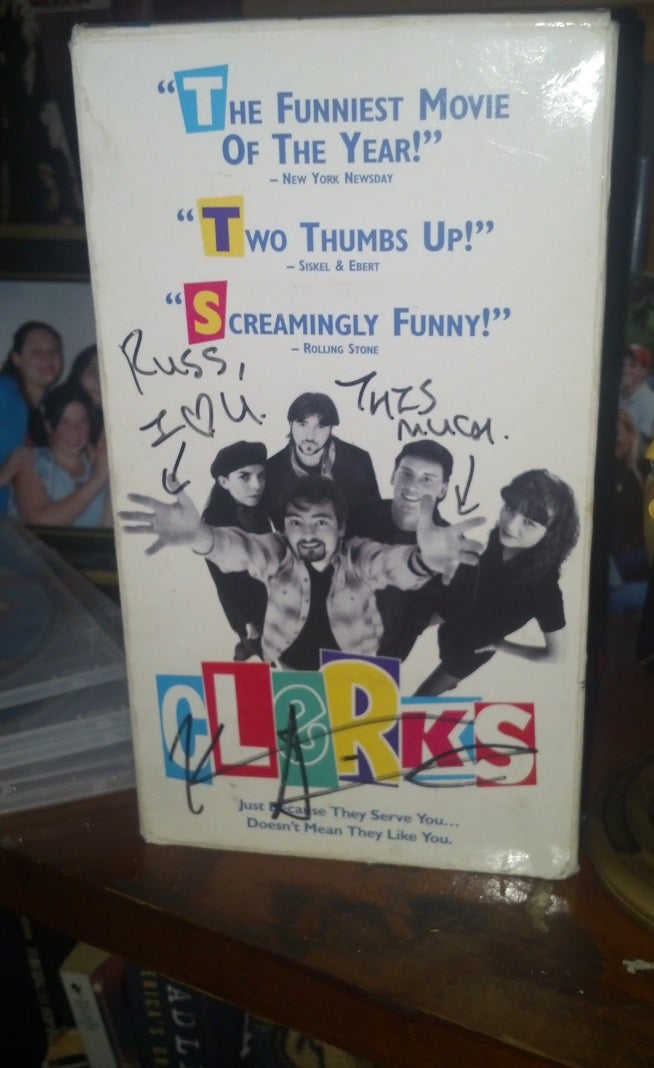 Before beginning an internship at Wizard, I had done a semester at a small, Christian college where I hadn't fit in at all and had spent much of my time hiding away in my dorm room, watching the same dozen or so VHS tapes that I had brought with me to school. Among them was what, at the time, was known as the "Jersey Trilogy" of Clerks, Mallrats and Chasing Amy. One of those tapes, signed by Smith, sits on the shelf in my office even as I write this piece (see right).

Even in a fairly conservative, religious school, Smith's films turned out to be common ground for myself and some of the other students, who would come by for semi-regular screenings of the three back-to-back while my poor roommate tried to do his homework.

Not long after that, but before I started at Wizard, I had met and interviewed Smith (another story that never ran), talking primarily about the difficulties he was having distributing Dogma at the time. Disney had offloaded the film to Lionsgate after pressure from a group of Catholic activists who were wary of the film's depiction of the Church -- but the transfer hadn't happened yet when we spoke, and the film was facing an uncertain fate, with some speculating it might never see the light of day. Lionsgate's involvement came before the interview could have been printed, even if Wizard had wanted it, since the turnaround time for a monthly, printed magazine was somewhat longer than that of a website.

Weirdly, in spite of a career where I covered Smith's work with some regularity and interviewed dozens of Hollywood types over the years (including his friend and protege Bryan Johnson for my college paper), I wouldn't speak to him in person again until this year at Comic Con International: San Diego.

That it had been fifteen years between interviews struck me as bizarre and impossible at the time; that Dogma came five years after Clerks meant that this anniversary was right around the corner.

The film franchise is still going, with a third installment set to go into production in the next six months or so starring the original film's Brian O'Halloran and Jeff Anderson along with at least Rosario Dawson from Clerks II and possibly some other familiar faces. Smith's recurring characters Jay and Silent Bob are sure to show up, particularly since they're part-owners of the convenience store now, although at this point the notion of a video store playing a role in the film seems unlikely at best and quaint at worst (this, coming from a guy who worked at one for years and met his wife there).

Smith himself has returned to his indie roots, with films he's funding out of pocket based on ideas that come up during podcast conversations with his buddies. He's casting his kid, his friends and his friends' kids in them and getting distribution from yet other friends in the form of the Weinstein Company, owned by the brothers who first brought Clerks to the masses at Miramax. Twenty years after its release, the film still resonates with audiences -- and with this writer, who likely wouldn't be working in the entertainment press if it weren't at least in part for the impact Smith's work had on me at a key moment in my life.