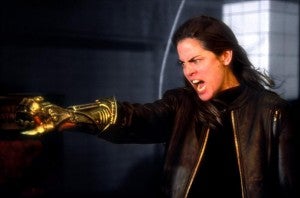 Yancy Butler, the onetime Witchblade actress who played Red Mist's mother in the first film, will return for Kick-Ass 2: Balls to the Wall, according to The Hollywood Reporter.

The film will be directed by Jeff Wadlow, who takes over behind the camera from Matthew Vaughn, who directed the first Kick-Ass but left the sequel to focus on X-Men: Days of Future Past.

Kick-Ass 2: Balls to the Wall will begin filming next month in Toronto and New York with an eye on a 2013 release. Returning stars Christopher Mintz-Plasse, Chloe Moretz and Aaron Johnson are joined by newcomers John Leguizamo and Donald Faison. The film will adapt not only the comic book series by the same title, but a Hit-Girl miniseries as well, both by Mark Millar and newly-announced Captain America artist John Romita, Jr.