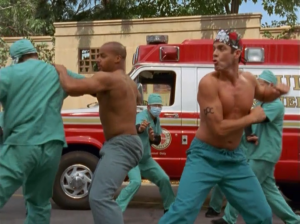 Donald Faison, who appeared in Clueless and starred in the long-running sitcom Scrubs, will join the cast of Kick-Ass 2: Balls to the Wall as Dr. Gravity, according to The Hollywood Reporter.

The actor is reportedly nearing a deal that will bring him in as the hero, who hopes to recruit Kick-Ass and Hit Girl into a superhero team.

The film is being produced by Matthew Vaughn, who directed the first film but was unavailable for the sequel as he's working on X-Men: Days of Future Past. Kick-Ass 2 will be directed instead by Jeff Wadlow, with Christopher Mintz-Plasse, Aaron Johnson and Chloe Moretz all returning to reprise their roles from the first film.

The movie, which is due in theaters in May 2013, will reportedly adapt the Kick-Ass 2 comic book series as well as the Hit-Girl miniseries by Mark Millar and John Romita, Jr.