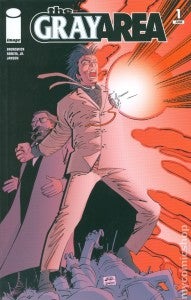 With the second installment in the Kick-Ass film franchise hitting theaters in just under a week, it seems like Mark Millar and John Romita, Jr. must be pretty involved with that process--but that hasn't stopped the veteran comics artist from trying to advance some of his other creator-owned work in Hollywood.

Romita, Jr. revealed to Comicbook.com in an exclusive interview that his 2004 Image Comics miniseries The Gray Area, written by Glen Brunswick and featuring art by Romita and inker Klaus Janson, is in the early stages of development, with a completed screenplay that's ready to be shopped to studios who ask "What else have you got?" after Kick-Ass 2.

"I pitched this idea to Glen Brunswick and now Glen has been doing a lot of work in the comics industry," Romita told us during a long conversation about his future now that his long-running exclusive deal with Marvel Comics has expired. "It's originally my idea we did--The Gray Area--and now there's a screenplay that's been written and they're going to take it out to the studios within a month, we're going to get it developed."

The Gray Area revolves around Rudy Chance--a brutal, corrupt cop and womanizer who expects he'll wind up in Hell after being executed for double-crossing a drug cartel. Instead, he finds himself in The Gray Area, where he is forced to combat evil for an afterlife police force in order to gain a shot at redemption. Given extraordinary powers, Chance hunts down the wicked to condemn and the worthy to heal.

Check back in the morning for more from our in-depth conversation with John Romita, Jr.!