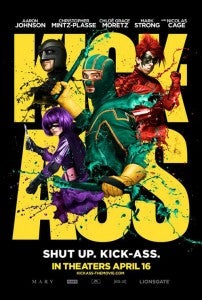 It's a good thing for us that we live in a world where superheroes don't exist, where villains are not larger than life and unstoppable and where every day hums along much like the others, right? Judging by the events in the Matthew Vaughn-directed Kick-Ass, the answer should be a resounding no! In Vaughn's capable hands, the action of the Mark Millar and John Romita Jr. collaboration comes to life with a pulse-pounding vibrancy and a believability that makes it arguably one of the best escapist films to come out at any point this year. Focusing on the life of teenager Dave Lizewski, played capably by actor Aaron Johnson, the film shows us a world where the quiet, shy kid with what he calls "the power to make himself invisible to girls" and the friends he hangs with at the comic shop is a pretty routine, dull place. If only life were more like it is in comic books. It's easy to see why Dave would want that, what with his current world one filled with few friends, bullies who repeatedly take his money and a crush on a girl who has no interest in him. It's in those roots that Dave's idea to bring a superhero to the masses begins, and where the true genius of the movie takes off. Lizewski throws himself into creating a super-hero persona, and he has predictably terrible results on his first attempt. After a setback, he gets back out there, determined to not only help those who need it, but to discover a sense of purpose and adventure for his own life. The action sequences are terrific, especially the first full-on on we see of Kick-Ass and his "skills". Vaughn has a knack for using music on top of action in a way that pays homage to Tarantino without feeling like a rip-off. The same effect is used throughout the film, and it never feels tired or forced. As Kick-Ass continues his work, he finds himself playing with bigger and deadlier fish, namely the gangster Frank D'Amico, played with appropriate lukewarm charm by Mark Strong, who is losing men in his organized crime operation to some unidentifiable costumed vigilante. Enter Hit-Girl and Big Daddy. A daughter/father pair whose campaign to bring down D'Amico crosses paths with Kick-Ass' good intentions. Whether or not Big Daddy has any right to drag his no more than eleven year old daughter into his war against the man who ruined his career as a cop is not relevant here, as Nicholas Cage, as Big Daddy, and the entertaining Chloe Moretz as Hit-Girl, make such an interesting and natural pair as they bloody their way through the gangsters that you quickly forget all that. Moretz in particular is very effective as Hit-Girl, a pint-sized vigilante with a deadly aim and a puckish love of the work she's doing, all the while dropping foul-mouthed insults at the men she offs. There's a nervous, tight energy that drives the action of the film forward, as D'Amico tries to find Kick-Ass, believing him to be the source of his company's trouble. In steps D'Amico's son Chris, played by Christopher Mintz-Plasse. Using a superhero alias as the Red Mist, Chris wants to prove himself to daddy dearest, and it's here that fans of the initial comic book source material should toss their trade paperbacks out the window and just buckle up for the ride, as things are about to get unpredictable. Everything starts to go to hell for the D'Amico family, Kick-Ass, and Big Daddy/Hit-Girl, as all the stops are pulled in each person or group's pursuit of their goal. The tension in plot works, as the film proves itself to be just unpredictable enough to make you gasp and hold your breath in many scenes, and again, Hit-Girl's scenes are just that damn cool. After some personal tragedy, the final sequence of the film finds our remaining heroes facing off with their respective nemesis. Red Mist, his betrayal revealed, faces Kick-Ass mano a mano, and it's here that Johnson's ability to portray both Lizewski's incredulity at his situation and his heroism comes through, and the movie delivers the bang at the end everyone wants to see. Also, just like any good superhero movie, there are seeds of a sequel. Kick-Ass has enough homages to classic comic book movie conventions, the snappy camera work, the over the top action, that fans of the genre and the comic book it's based on will appreciate the nod to tradition, even the heroic narration that's a staple of the Spider-Man franchise feels right here. There are a few times when Kick-Ass seems like a second player in his own film, but that is quickly forgotten as the film embraces the ability of the ordinary to be extraordinary, all the while serving up action and thrill-a-minute black humor. Parents would be advised to keep their young ones away, as, personally, the film earns every bit of its R rating. That shouldn't deter adults from enjoying every minute of this excellent and roller-coaster like film! Fans of the book shouldn't be disappointed in the liberties taken with the original, even though I did find a couple of things Kick-Ass does not quite fitting with the character of the comics. The spirit of Millar and Romita Jr.'s book is here in every blood-spattered sense of the word!

Kick-Ass Does Exactly What it Says and More!