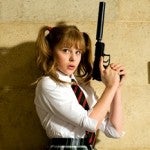 When Matthew Vaughn said he was going to do the 'Kick-Ass' comic book series justice, he wasn't kidding. In an interview with MTV News, the director indicated that the pics of Hit Girl in a schoolgirl outfit aren't her costume:

"That's not her costume. No one's seen her costume yet. That's just part of a plan to take some people out. That's her alter ego."

Vaughn said that Nicolas Cage will also wear a costume similar to that in the comic book. It's been asked and answered, but Vaughn wants people to know that the film won't shy away from the violence in the comic:

"It would be like me buying the rights to 'The Exorcist' and saying 'We're not going to make a horror film out of this.' What's the point of doing a watered-down, diluted version of it? You end up with a film that I wouldn't want to make or see."

Does that last quote sound a little familiar? It's eerily similar to what Zach Snyder was saying leading up to 'Watchmen.' Many folks feel that Snyder's faithful adaptation to the graphic novel cost the movie dearly. Are we about to see the same thing here with 'Kick-Ass?' What do you think?