The Golden Circle will not only bring back Vaughn (for his first sequel ever) and the principal cast (including Colin Firth's Harry Hart!); it will also introduce a lineup of big-name American actors to the franchise, including Julianne Moore, Jeff Bridges, Channing Tatum and Halle Berry. Not too shabby.

In a recent interview with Cinemablend, Kingsman star Taron Egerton made some bold claims about how the sequel will top the original. Egerton said that, "[Matthew Vaughn] goes even further with it. It's kind of absolutely crazy. Julianne Moore is the villain, and she's genuinely terrifying. She's really, really, really great. So it's bigger, badder, more guns, you know? All that stuff. It's fun." 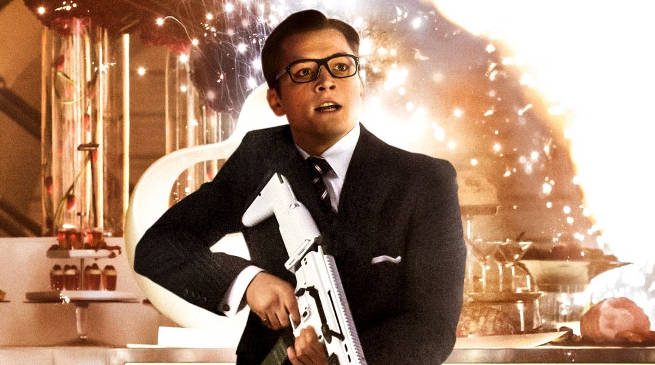 The first film had fun with Samuel L. Jackson playing a sort of demented Russell Simmons type as the central villain; one can only imagine what Moore has cooked up in the way of a performance. In a Matthew Vaughn movie (especially one inspired by Mark Millar) it seems like going over-the-top would be a truly tall order. After all, the last film had an assassin walking on weaponized prosthetic legs, an insanely violent mob fight in a church, and it our hero celebrated his victory over evil by sodomizing a princess.

...That's all to say: in the case of a Matthew Vaughn sequel (again, something we've never seen), the idea of what constitutes 'bigger and better' boggles the mind.

Egerton didn't have any info on when we'll see a Golden Circle trailer, but assured fans, "Matthew Vaughn works in mysterious ways, but you won't be disappointed, it's going to be awesome."

Kingsman: The Golden Circle will be in theaters on October 6, 2017.

Kingsman: The Golden Circle is 'Absolutely Crazier' Than The Original