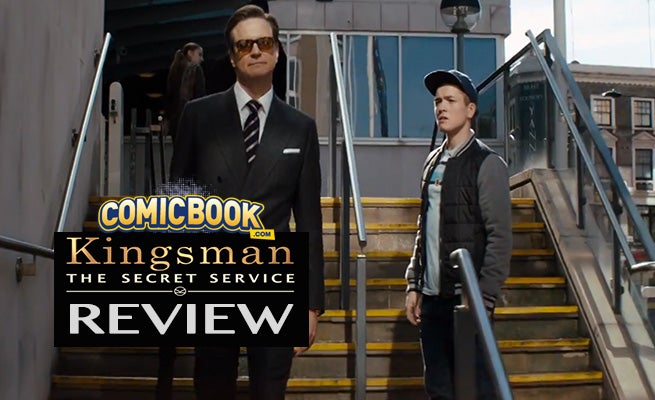 Kingsman: The Secret Service is the fifth and latest film with Matthew Vaughn at the helm. Mark Millar & Dave Gibbon's story comes to life in extravagant fashion with their characters being portrayed by stars like Colin Firth and Samuel L. Jackson, and introducing the world to Taron Egerton- a new guy who I think we'll all be getting used to, soon.

The movie cuts right to the chase opening up with a unique open credit scene of names and logos forming from debris of an exploding castle being invaded by the Kingsman. The tone of violence and intensity is present from the time the screen illuminates, but it's balanced with humor packing enough cleverness and wit to make even the most cynical people have a great time.

Eggsy (Taron Egerton) is a young man who lost his father years ago in the opening scene. He lives miserably with his helpless mother (Samantha Womack) and her abusive, annoying, gangster boyfriend who from the start is one of those guys you just want to punch right in the nose. Eggsy blames the world and circumstances for the way his life has turned out so far but aside from being a harmless, petty street criminal (seemingly for the thrill of it), he has a big heart when it comes to family and friends.

After spending a night in jail for taking a joyride in a stolen car and covering for his friends, Eggsy is bailed out by Harry Hart (Colin Firth), an 'associate' of Eggsy's fallen father, a.k.a. a bad-ass super spy looking to mold Eggsy into the man he knows Eggsy can be.

From here, Eggsy embarks on training to be a Kingsman- an exclusive group of gentlemen with almost super-soldier fighting abilities. Training turns out to be more of a competition than anything else, in which elimination can come in the form of failing, quitting, or even dying. I won't spoil any of the tests Eggsy has to pass because they're a mix of fun and intensity that I would feel straight-up wrong to take any bit of that away from you.

During Eggsy's training, our big bad villain, Valentine (Samuel L. Jackson), is plotting to kill all people who are less fortunate than others, one speech impendimented word at a time. His plan is as unbelievable as it is acceptable in this particular film.

The perfect word to describe Kingsman: The Secret Service is a "blast." It's a blast of fun. It's explosive. It packs a punch with it's humor. It unloads action and violence on the audience perfectly so they can't look away. I couldn't phrase my thoughts on the brutal, chaotic church brawl any better than the way director Matthew Vaughn did when I asked him about it- "a very beautifully choreographed ballet where you're mesmerized by what you're seeing and not disgusted."

As I said, with the violence comes excellent humor. The film felt almost like a R-rated Guardians of the Galaxy, but on Earth and with super spies. The plot wasn't the most plausible but you're having so much fun that you go with it. Valentine has a gigantic mansion and serves Twinkies and McDonald's with wine as if they were fine cuisine.

All in all, Kingsman: The Secret Service has all the elements of movies people want to see. It has superbly choreographed action sequences with fantastic cinematography to match. It uses music and humor to set the tones of scenes that would otherwise feel out of place. Instead of being careful and tip toeing a thin line between a satirical comedy and action thriller, Kingsman goes full sprint from start to finish. Some moments (especially one in the climax) might feel a bit over-the-top or excessive, but in the extremely grand scheme of the movie, they fit.

Bottom Line: Kingsman: The Secret Service treads a very thin line between a self-aware, satirical film and a serious one where you care about the characters and events. Somehow, it commits to both in a tremendously fun manner. 8.9/10