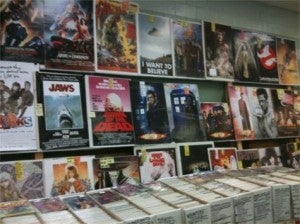 As a new series of articles on Comicbook.com, we are going to be posting reports from comic book conventions across the U.S.A. The convention reports will include everything from what guests appeared to how many fans attended to what comic books were selling. We hope to cover everything from local conventions in smaller cities to the largest conventions in major cities. Our first report is on the recent Knoxville Comic & Anime Con. The show was a two day event with over eighteen dealers and twelve guests. The guests were from all mediums, including TV, movies, comics, and music. Jason Craig, who is the artist of Freddy vs Jason vs Ash was the artist guest of honor. Other guests included DC Comics writer Dan Jolley, Mike Holman from MTV, Melissa Cowan from The Walking Dead, and the voices of Invader Zim and Pokemon. Dealers had a variety of silver and golden age comics, toys, star wars, DVDs, posters, and t-shirts. Saturday morning started off great with a long line of fans waiting to get into the show, which opened at 10 AM. The total attendance for Saturday was around 700 people. Fans enjoyed Q/A panels with the Invader Zim guys, a comic writing panel with Dan Jolley, a film room, and a costume contest. Sunday's turnout was smaller, but still had around 250 people. All the dealers and guests said they had a good show. A range of the comic book sales included a X-Men #266 CGC 9.6 for $40, an Avengers #57 VG for $35, and a Punisher 31 VF for $5. Also, a dealer bought Fantastic Four #1 and 2 Giant-Sized X-Men. An Amazing Fantasy #15 CGC 8.5 walked in the door, but no one had the $250,000 that was being asked. Still, it was nice to see one. Sales were good, the guests all did well and overall the show was a success. The next convention we will be covering is the Atlanta Comic Convention on July 10 at the Marriott Century Center in Atlanta, Georgia.