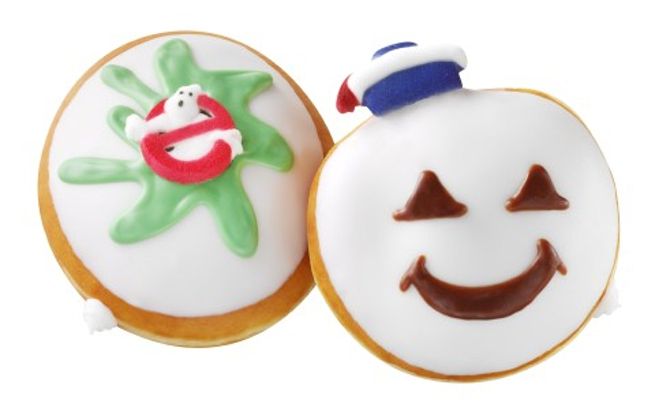 In conjunction with the release of the Ghostbusters 30th Anniversary Edition Blu-ray, Krispy Kreme is introducing Ghostbusters and Stay Puft Marshmallow Doughnuts that will be available September 29 through October 31, 2014 at participating Krispy Kreme US and Canadian locations. Here are the details on the donuts.

"We are truly excited to collaborate with Sony Pictures in celebration of the 30th anniversary of the iconic Ghostbusters brand,” explains Dwayne Chambers, Krispy Kreme, Chief Marketing and Innovations Officer. “And we are delighted to bring our fans two delicious limited edition treats that are as unique, creative and joyful as this beloved film franchise.”

“We are so excited about the 30th anniversary of Ghostbusters and our collaboration with Krispy Kreme Donuts as well as the launch of our new Ghostbusters website. Both brands have an incredible legacy with consumers and with exclusive donuts at Krispy Kreme locations and a retail promotion featuring the Blu-ray offering, we are confident everyone’s proton packs will be loaded,” added Greg Economos Senior Vice President, Sony Pictures Consumer Products.