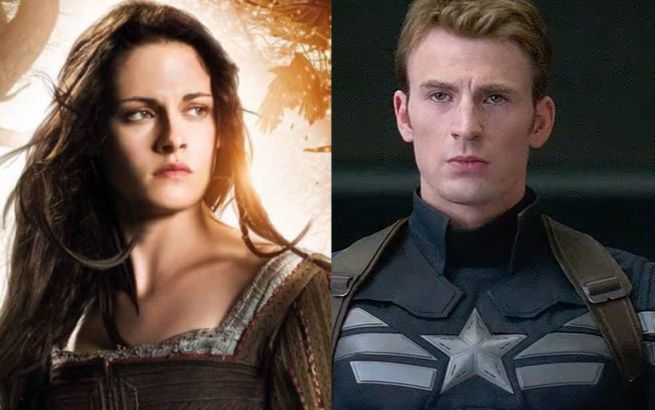 During a recent interview, Still Alice star Kristen Stewart said that part of keeping her young career unpredictable is that after she did years of Twilight blockbusters, she headed into indie territory.

Now, though, she's thinking she might want to take a shot at superheroes.

“I love watching those movies,” the Twilight star told Yahoo Movies. “I would love to show people that I can do more than just be ‘Kristen Stewart’ in a different movie, in a different circumstance.”

Noting that she'd had some experience in Snow White and the Huntsman, she added, “I’m sure I could get on board with Captain America, you know what I mean?… It would just have to be the right thing.”

Of course, it might be an uphill fight to connect with the audience on such a project; after being a Comic Con pariah for years (many attendees hated the Twilight crowds) and then taking her first big action role into scandalous territory when an affair with the Snow White and the Huntsman became public. Still, she's one of the most bankable female actors under 30.

My Hero Academia Cosplay Features The Final Form Of Midoriya

Here's Why The Legend of Zelda: Breath of the Wild 2's Actual Name Is Still a Secret

Is WWE Bringing Back the King of the Ring Tournament?

Will WandaVision Get A Season 2? Marvel's Kevin Feige Responds