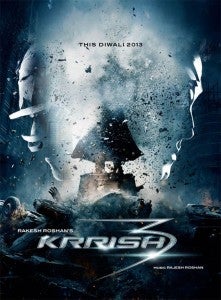 Krrish 3 is an upcoming Bollywood superhero science fiction film, which is being produced and directed by Rakesh Roshan. The Krrish 3 trailer was uploaded to YouTube back in early August, and it immediately drew attention because of the large scale destruction shown and the slow motion special effects.

Krrish 3 looks a little bit like Man Of Steel, The Matrix, Transformers, Iron Man, and the X-Men all wrapped up into one. In a very short time, Krrish 3 has hit over 13 million views on YouTube.

A report in the Times Of India has put the Krrish 3 trailer as outperforming blockbusters like The Avengers and Thor. When we checked YouTube, The Avengers trailer  actually had quite a few more views. However, The Avengers was released over a year ago, so the Times Of India article could be referencing just the number of views received in the first ten days. It could also just be confusion over how studio trailer get uploaded multiple times to YouTube, so some trailers could show less views.

Regardless of whether Krrish 3 outperformed The Avengers on YouTube in a similar time period or not, thirteen million views on YouTube for a new movie trailer is still impressive no matter how you look at it. Check out the full trailer below.