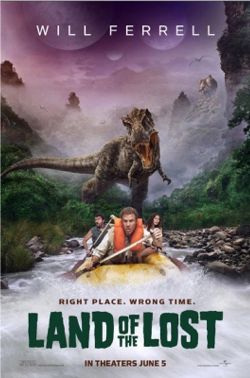 Land of the Lost is taking a beating from many critics and the early box office numbers are disappointing. Early box office estimates for Friday, June 5 are putting the Land of the Lost in the seven to eight million range for opening day. These estimates place Land of the Lost in third place behind Up and The Hangover. Based on the disappointing Friday numbers, most forecasts are predicting a twenty to twenty-five million dollar box office for Land of the Lost over the Friday to Sunday opening weekend time frame. While this might not seem bad for most movies, it isn't good for a movie with an estimated $100 million budget. I was among the moviegoers that contributed to Land of the Lost's Friday box office total. The screening I attended was packed, even though it wasn't sold out. While I can't rave about the movie as being the next Star Trek, I was entertained, and most of the rest of the audience seemed to be entertained as well. Don't get me wrong, Land of the Lost is not a great movie, but it is also not the worst movie ever made, as some critics seem to be implying. I'm sure it will wind up on many critics worst movie of the year list at the end of 2009, but Land of the Lost is less of a bad movie, than a movie that completely misses its mark. As almost everyone knows, Land of the Lost is based on a classic seventies Saturday morning TV show by Sid & Marty Krofft. While the movie version delivers a lot of nods and winks to the original Saturday morning TV show, it falls short of capturing the nostalgia of the original show. The movie will likely not appeal to Land of the Lost purists, who would have preferred a more serious take on the cult classic. One of the weaknesses of the film is the script. For anyone who has never seen an episode of Land of the Lost, many of the inside jokes will be missed and many scenes will come across as just confusing and strange. By making a movie that both references the original show but is different enough to alienate fans of the original show, Land of the Lost falls short both for viewers of the original show and for viewers who have never even heard of the original show. Based on plot alone, Land of the Lost could be deserving of a worst movie ever label, but there is a redeeming part of the movie. The redeeming part of the movie is the comedy delivered by Will Ferrell and Danny McBride. Most of the audience howled in laughter at the skits involving Dr. Rick Marshall (played by Will Ferrell) and Matt Lauer. In fact, I dare say if the entire movie had been just one long skit involving Will Ferrell on the Today Show with Matt Lauer, it would likely have been a better movie. After the Today Show skits, the best and funniest scenes in the movies all revolved around Will Ferrell's interaction with Danny McBride. The comedy duo essentially carried the movie and helped keep the audience's attention off the confusing and disappointing plot. The scene of Will Stanton (played by Danny McBride) taking Dr. Rick Marshall and Holly into a low budget theme park type ride gave me early hopes that the whole movie would be a laugh riot. However, there were boring and confusing plot twists that dragged the movie out between the often hilarious skits. Some of the humor in the movie seemed aimed at kids while other parts of the humor were definitely adult. The movie had just enough adult humor scenes to earn a PG-13 rating, which will likely dissuade parents from taking the kids to see it. The studio would likely have been better off cutting the more adult scenes and going for a PG rating, because then the movie could have played to a family audience and boosted its box office take. If you're in a light mood and want to go see a movie that will give you a couple of good laughs, Land of the Lost is a good movie to pick. It's very unlikely that Land of the Lost is going to get any Academy Award nominations or wind up on any best picture lists, but it's also not the worst movie ever made.

Land Of The Lost Is Not The Worst Movie Ever