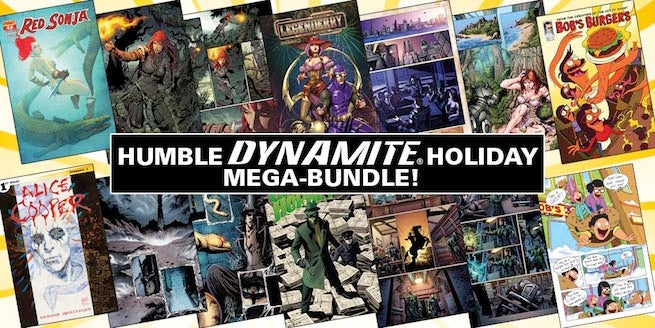 With less than 24 hours to go, Dynamite Comics is offering fans an opportunity to score over 140 digital comics, simply by donating to charity.

"This is the Last Call and we won't be repeating this promotion with these titles in one bundle again as it's a special promotion for our 10th Anniversary," said Dynamite Publisher and CEO Nick Barrucci, "Purchase the bundle to not only help support Dynamite and the creators we work with but also to donate to support charity, donate to treat your friends, donate to treat yourself. The Humble Dynamite MEGA Bundle is the perfect chance to do something good this Holiday season."

The Humble Dynamite MEGA Holidays Bundle supports Doctors Without Borders/Médecins Sans Frontières, Make-A-Wish, as well as the Comic Book Legal Defense Fund which defends first amendment rights of comic book professionals nationwide. To date Humble Bundle has raised over $49 million for charities around the world. As with all Humble Bundles, customers can choose how their purchase dollars are allocated, between the publisher and charity, with Dynamite's help last summer they were able to give over $100,000.00 during The Humble Dynamite 10th Anniversary Bundle in July.

Additional information about the titles and being offered for the charity event can be found at Humble Bundle.