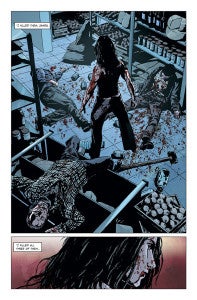 As the second issue of Greg Rucka and Michael Lark's stunning new Image Comics series Lazarus hit the stands this week--and the press of San Diego Comic Con International content finally started to ease up--we dug back into our phone records to find a conversation we'd had about the first issue of the series nearly a month ago now.

Both Rucka and Lark joined ComicBook.com to talk about launching a book that's so different from much of what else is on the market right now, what they hope to do with Lazarus and to tease a little bit of what Forever Carlyle has in store for fans in the coming months...

ComicBook.com: How do you go about doing the body language for something like the "resurrection" part of the story? In the first issue there's that sequence where she comes back from the apparently-dead and she's a little spastic and it wasn't just the bad-ass "I'm going to stand up and do this."

Lark: I'd gone through a couple of different drafts of that particular scene and I just happened to be watching TV late at night and The Fifth Element was on.  And I thought about the scene where she was being birthed in that and I thought to myself that Forever is kind of being born again here, and it's going to be yucky and painful.

Then there was that great line that Greg wrote that was "...and it hurts. God, but it always hurts." That was the line right there. You have to remember that Greg is giving me very good scripts.

Greg lets me know what the characters are all about in those scenes so it's just a matter of tinkering and letting the characters act. They usually tell me what to do. It takes a little bit for that to start happening but Forever is at the point now where she's telling me what to do. I don't get to make up her attitude or her body language; she has it all her own. 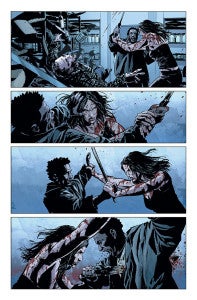 ComicBook.com: I feel like the closest thing I can come to a real parallel for this character is 355 from Y: The Last Man. She has that same kind of no-nonsense vibe about her.

Lark: Yeah, we talked a lot before I started drawing anything; I didn't start really drawing the first issue until like January. There was a long, long gestation period. We did the four-page preview and that took way longer than any four pages should take because we wanted to figure all of these things out. It was good we did it because the first issue would have taken even longer to do had we not, but we talked a lot about who Forever was.

When I started drawing her, Greg would have to come back to me and say, "No, she's this" or "She's that." And once I kind of got the handle on it, it was really easy. Greg writes such great characterizations that it's not difficult. I've had struggles with other writers that I've worked with, where I can't figure out what the characters should be doing, saying, thinking, feeling--it's just a mystery to me and I have no connection to those characters at all but Greg and Ed [Brubaker] - when I get scripts from them, its' really easy for me to figure out what's going on with the characters.

I kind of read the script and then I put it away and let it percolate in my head to where it almost becomes a little movie in my head and I can see the characters doing what they're doing. It's not a conscious decision; it's more them telling me what to do.

ComicBook.com: You guys managed do a really good job with the title drop. That often feels out of place. Is this something that people say behind her back or has her identity been established in the world?

Rucka: No, it's a title. And you'll see not every family has someone in this office but almost all of them do.

It is explained as we go on, but she is known as the family's Lazarus and if you were in any position of responsibility or use to the family--if you are trade-slash-serf level--certainly you are aware of who the family members are. And so you're aware of who this person is because she more than any other member of the family, with maybe the sole exception of her father, when she enters a room that is a Carlyle room, her authority comes with her.

There's a reason why she's wearing a uniform and Jonah in issue one isn't. You'll see at the beginning of issue two, ther'es a meeting. It's sort of a war council amongst the family and it's her father and her three other siblings--the fourth does not attend--and you see they're all dressed business casual and she's standing there in her uniform.

It is the title of the office, that's all it is. But you don't use that word without all of the weight that comes with it.

ComicBook.com: How specific are the scripts with the action sequences?

Lark: We're actually working on that and developing how we do that and what the division of labor exactly is on that. Greg is a former fight choreographer so that definitely is going to play into how he does it.

Greg and I have a working relationship where there's a lot of trust. He knows that I am always going to have the best interest of the story he's written in mind and I know he's always going to give me the best script he can and he's also going to be open to what I bring to the table if I bring something different. So he choreographs it and tells me what's happening and then I let that movie play in my head and sometimes I kind of throw out what he's done in terms of the panel breaks and the page breaks, sometimes I stay really close to them. It's kind of a mix; its just depends.

Greg's pacing is usually pretty flawless but at the same time any writer when they write a page they're not planning ahead on what the balance of close-ups and long shots is going to be and how it's going to visually balance on the page and stuff like that. So I'll make tweaks to make those things happen as I need to.

As far as the choreography goes, in that first scene in that first issue, there were a lot of phone calls, I think. A lot of e-mails. I remember sitting at a friend's house on a really nice day and I was sitting on the patio and I had a little map of that pantry room drawn, and I sat there with little circles and little numbers and initials in them for each character showing them: how are they moving around this room? How are they in relation to each other, so that I could figure out exactly how to get all of that in there. And after I figured that out, I just had to figure out where to put the camera to get the best view of that action. That's generally how it works for that stuff.

Rucka: Our working relationship I think is really excellent. I can script a sequence with the full confidence that Michael's going to read whatever I've written, understand absolutely what we want to accomplish and then if necessary throw out everything I gave him to execute it.

When I was a younger and probably more full of myself man, I was much more concerned with that Shakespearean, "Pray! Speak the words as they've been written" sort of thing. But the fact of the matter is, and I've said this elsewhere, it would be the height of arrogance for me to go to a professional visual storyteller and assume on the basis of my skill set, even if it's a pretty deep one, that I can tell him how to do it better.

That's not a collaboration and denying that input would just be foolish and would hurt the work.