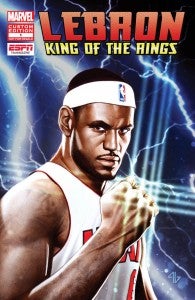 Comic book fans in the city of Cleveland can share a snicker at LeBron James's expense this week, as a new comic book tipped in with copies ESPN: The Magazine casts James as "The King of Rings," purporting to tell the story of "his next six titles."

Says the publisher, "LeBron: King of the Rings springs from the minds of ESPN's Ty Wenger and Otto Strong, acclaimed writer Christos Gage and fan-favorite artists Mike Deodato, Scott Eaton, Greg Land and Terry Dodson. Featuring a cover by Adi Granov, this is the first comic book created in collaboration by Marvel Custom Solutions and ESPN The Magazine."

The cover image, though, is pretty evocative of The Mandarin, Iron Man's arch-nemesis who will stop at nothing to get what he wants, and who wears a series of magical rings, one on each finger of one hand.

Both Marvel Comics and ESPN are owned by the same parent company, Disney, who likely paired the two. This partnership comes not only right before the start of the new NBA season but just a couple of weeks after Marvel Comics engaged in a promotional tie-in with the Philadelphia Eagles to celebrate the retirement of Brian "Weapon X" Dawkins. 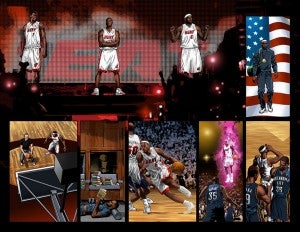 "The undeniable synergy between ESPN and Marvel Comics is on full display in LeBron: King of the Rings," said Axel Alonso, Editor in Chief of Marvel Comics.  "Professional athletes, with their super-human abilities and character flaws, are the closest thing to real-life super heroes, and in the NBA none stands taller than LeBron James.  Whether you root for — or against — the Miami Heat in its quest to achieve those rings, this story will make you laugh, wince and cheer."

"Whether you come for the wit and commentary of ESPN's basketball insiders, or the fantastic storytelling skills of Marvel's all-stars, LeBron: King of the Rings has something for everyone," said  Bill Rosemann, Editor, Marvel Entertainment. "A true dream team has assembled to take you on a wild 'What If?' journey sure to have NBA and comic fans buzzing."