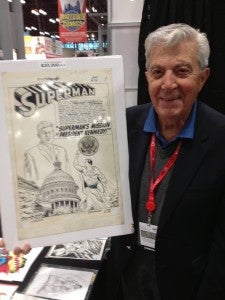 "You cannot negotiate with people who say what's mine is mine and what's yours is negotiable," President John F. Kennedy is quoted as saying.

It's a quote that stings for legendary Superman artist Al Plastino (listed as one of ComicBook.com's top ten Superman artists of all time), who has had some of his original art inexplicably turn up at auction.

The seller? Nobody will tell him. But it's the pages themselves that are of concern--because he long ago donated them to Harvard's Kennedy Library, the artist says. According to his account, though, the art was never received there.

"Please help if you can," Plastino wrote to his Facebook page, along with the photo at right. "The art I donated and thought for all these years was being housed at the Kennedy library at Harvard is now being auctioned off on the anniversary of Kennedy's assassination. And now I am finding out that the art may have never made it to the library. The archivists tell me there are no records of it ever being received. I asked for the art back and they will not give it to me. I asked for the consigner's name and they will not tell me that either. They tell me I have no rights to my work and that it is too late to get it back."

The story in question was written prior to Kennedy's assassination, briefly delayed and ultimately published as a memorial tribute to the President, and featured Superman interacting with the late leader. Slated for Superman #168, it eventually went to print in #170.

Heritage Auctions lists all ten pages of the story for sale at their website, with bidding opening on November 1.