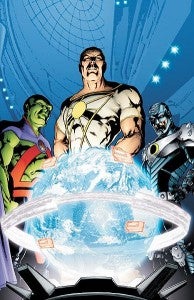 As the team books keep rolling out of DC's relaunch, more and more lineups get shuffled, revealed and, of course, critiqued! With the two books we have today, Legion Lost and Stormwatch, we're looking at two teams that may not be on everyone's headlining lists of team books, but they each have their own appeal. The Legion of Super-Heroes has been around for decades now, and for many, Stormwatch embodies a certain era of comic book history: the mid-1990s and the rapid expansion of publishers outside of the "big two". Now that Stormwatch is integrated into the DCU, the contrast between them and the Legion is curious. These two books appear to have two different audiences in mind, with Legion Lost appearing to be geared to more of the teen, young adult set and Stormwatch skewing towards young adult and older readers. Both have appeal, but Stormwatch seems poised so far to be a bit stronger in overall storytelling. 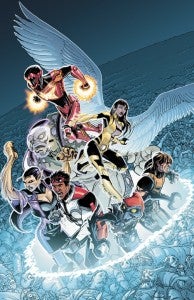 Starting with Legion Lost, the team arrives in our contemporary Earth, on the trail of a man with potential for contaminating the planet with a strange virus that has destructive capabilities. The team is an eclectic mix of powers, personalities, physical appearance and more. The banter between the team is pretty believable and snappy, with their own bewilderment at appearing in our time apparent, especially as they try to adjust to tracking the carrier and battling our toxic environment on top of it all. It's a very young team, and even the artwork, supplied by Fabian Nicieza and Pete Woods, skews young, giving the book the feel of a young adult comic. It would be a perfect match for young teens if not for some of the very sophisticated vocabulary that appears in some spots. The story seems to take awhile to build, and I have to admit that there's a manic pacing to the issue that makes it feel as if you're never quite sure what's going on. The pieces slowly start to come together as the team's confusion and adjustment starts to ease. The final pages, once they've located the source of the trouble, the team finds itself stuck, down a couple of members, and uncertain as to the nature of level of contagion they have been exposed to. The series has a path, and with a diverse cast, it certainly has an audience for it, but. Grade: B-

Over in the pages of Stormwatch #1, things get a little more "serious" for lack of a better word. The youthful energy and exuberance produced in Legion Lost is gone here, as an established and arcane group known as the Shadow Cabinet has been in charge of Stormwatch, a group of long-existing guardians of the world who are currently engaged in an effort to recruit a powerful being named Apollo to their cause. As Martian Manhunter, Projectionist and Jack Hawksmoor soon find out, he is less than interested. Claiming they're not super-heroes but rather "professionals", they try to demonstrate their power and convince him, but it ends badly, with the appearance of character Midnighter altering things quite a bit. The tone of the series feels a bit dark, with no time for playing around as far as these heroes are concerned. There's a bit of sarcasm added by one of Stormwatch's operators, which brings a bit of dark humor to the series. The series promises to be one that seeks to fill the role of the "anti" superhero book, and so far it seems to be working. Grade: A