With more than fifty issues to review over the course of a month, it's probably not surprising that there's a fair amount of time being spent on them. There are also quite a few revelations--ranging from the mundane and expected to the startling and baffling--that rae coming out in DC Comics's "zero month" issues.

So, one year in and with some backstory revealed, what books remain "must-read" titles going forward?

Many of the titles below are genuine must-buys, and even a couple that had pretty poor zero issues probably shouldn't have that discourage readers from checking out the second year. 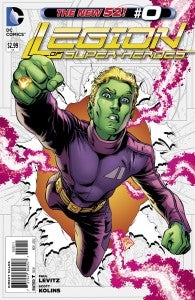 It's fascinating that in the world of the New 52, as in the original, pre-Crisis on Infinite Earths continuity, we don't really see the formation of the Legion of Super-Heroes, even in their earliest days. It makes sense, in a way, when you consider that the Legion is a bit like a peacekeeping force. Would you necessarily need to know the nuts and bolts of how your local police were formed?

The art is not Scott Kolins's best work--far from it. The colors, washed out and pastel like we've seen in a few other titles this month, don't really serve the story well, and frankly the art is itself a distraction. That said, it feels like a very "young" book, so perhaps there's a stylistic choice being made that just doesn't work for me.

Since the relaunch, Nightwing has been one of the most consistently excellent and underrated books in DC's entire publishing line. Second on some months to Batman (and sometimes not even that), it's one of the best Gotham-based titles in print.

So it's pretty disappointing that this month's issue was such a misstep.

That's not to say that the issue was terrible. Certainly it's a great entry point for new readers, which is what these New 52 #0 issues are supposed to be. That said, the whole "reading the body language" thing just feels like it's superimposing Tim Drake's persona onto Dick, and that really just distracts from the bigger plot (and, for longtime fans, calls attention to the fact that Tim's backstory is a bit of a mess at the moment).

Setting up the "Robin" identity as something that's definitively Dick's is an interesting swerve, as well. It makes his decision to leave the role for Nightwing and to allow Bruce to continue setting up Robin franchises a bit of a curious one, but that's not distracting, just amusing. Setting up Lady Shiva in the next arc should be a lot of fun. It would be nice to see Dick get a few stories where he stands on his own, rather than in the shadow of Batman--something Higgins pulled off in the early going, before the series (and all of the Bat-family books) got consumed by The Court of Owls. Of course, we've got Death of the Family on the horizon, so it's not likely...!

Red Hood and the Outlaws #0

From one ex-Robin to the next, Red Hood and the Outlaws is arguably the other side of that "most underrated" coin. A pretty mediocre book that's had big-name talent on it since the launch, the talented Kenneth Rocafort will follow series writer Scott Lobdell over to Superman. Lobdell, who has been the weaker link in the series from the word go, will remain on with Timothy Green II, but first we've got a fill-in issue by Ig Guara, who frankly was not right for the book.

The kinetic energy that Guara brings to his more action-oriented books was just missing in this story, a deliberate and text-heavy issue where even the sequential panels seemed mostly to jump from place to place rather than conveying instantaneous movement. Props to Guara (or somebody), though, for using the Tim Burton Batmobile in the flashback sequence to the day the pair first met.

Still, Jason Todd's resurrection story--full of holes put there by design and ready to be filled in an upcoming story--is a giant step up from the one we had before the New 52. So there's that.

In what seems like the first real look at the villain from H'El on Earth, we get a brief moment of "What the hell just happened?" when someone who looks quite a bit like the Superboy of the New 52 shows up on Krypton in the moments before Kara is blasted off.

That seems like the key moment, as the rest of this issue is true backstory to the #1, setting up how Supergirl got to Earth and why it was that she seemed so disoriented when she arrived. It's a well-done but ultimately inconsequential book. Still, Supergirl has consistently been one of the most entertaining and beautifully-rendered books in DC's line and this is the first time since the relaunch that the world of Krypton has been drawn and doesn't look like a B movie set. 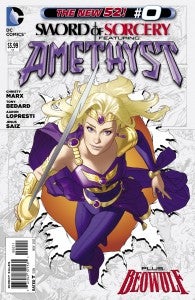 As has been pointed out, there's a bit of attempted gang-rape in this book, which has been timed with a release date that corresponds with the first episode of a new DC Nation series of animated minisodes starring the book's lead character, Amethyst of Gemworld.

That said, it's hard to imagine a better fit artistically for this book--with its fantasy landscapes and heavily-female cast--than Aaron Lopresti, whose women are both strong and beautiful here and in most all of his work.  The colors in this issue are spot-on; that washed-out, pastel-heavy color palette that I criticized above has found a title where it works perfectly, giving the whole issue a kind of dreamy, fantasy-inspired feel.

And the sequence, which really does feel out of place, falls short of actually spoiling what'a s pretty strong debut issue largely because it's not something that seems likely to come back as a major driving force for the future. Taking it as an event that occurred in a vacuum and helped to propel the character to become who she needed to be, it's less disruptive.

This seems like it would be a nice place to reintroduce some of DC's younger, supernatural characters, many of whom don't necessarily have a regular home. One I'd particularly like to see, as her personality and the lights and colors associated with her power set would work beautifully here, is Anima.

It's interesting to see Diana reinstated as Wonder Girl in this issue. Obviously it's a role most associated with Donna Troy, although its origins are hardly that simple. It's been decades since we've seen Diana in this role, and almost as long since fans have seen anything like the costume she's wearing, and it's virtually impossible to get past that in the story.

Why? Because it's the first time that they've used Cliff Chiang's beautifully simple art style in one of the most obvious ways imaginable: they tell a very Silver Age-inspired story with all of the cheesiness and camp that implies. That it remains inside the context of the existing book and doesn't feel cheap or silly or throwaway is a real accomplishment, and the creative team pulls it off beautifully.