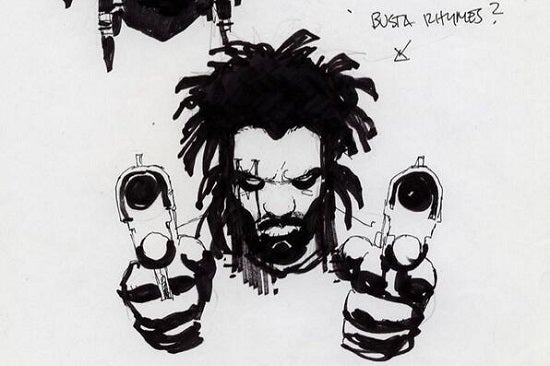 Earlier this week, Bishop: The Last X-Man writer Joe Harris shared on Facebook that it was in that miniseries that editor Jason Liebig suggested to artist Leinil F. Yu that the title character could use a more contemporary look.

Liebig suggested to Yu that he use rapper and actor Busta Rhymes as an inspiration, according to Yu and Harris.

Since we reported that interesting piece of X-Men history early this morning, though, Liebig joined in the conversation on Twitter, providing some commentary and some looks at Yu's redesign for Bishop, which served as a template for then-series artist Georges Jeanty. You can check them out embedded below.

Thanks to all involved for their conversation and participation! You can see Leinil Yu's work in New Avengers next month; Joe Harris does Great Pacific, The X-Files: Season Ten and will be doing upcoming work on the Armor Hunters storyline at Valiant. Jason Liebig is at CollectingCandy.com, and you can next see Bishop's dreadlocks in X-Men: Days of Future Past in May.

@russburlingame as per my editor's suggestion:)

“@leinilyu: @russburlingame as per my editor's suggestion:)” Thks for remembering, Leinil! Your designs were an awesome visual foundation.

Thor: Love and Thunder Fan-Made Poster Imagines the Guardians of the Galaxy's Return