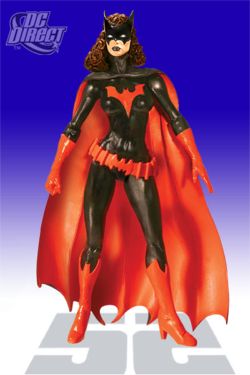 has killed off Batman twice in recent months, but both deaths have been a less important story in the press than say President Barack Obama making a five page appearance in Amazing Spider-Man. Now, Batman is not only being overshadowed by a wall crawler from a rival comic book company, but the sexuality of one of his potential replacements is a bigger story than the Dark Knight's own demise. Yes, a seventy year old, comic book character with a recent half-billion dollar movie can kick the bucket, but it's not big news until a lesbian gets involved. DC Comics recently revealed that Batwoman would take over Batman's starring role in Detective Comics this summer. As Fox News reports Batwoman's alter ego Kathy Kane is a red-headed lesbian. Fox News also points out that Batwoman wears a figure-hugging black outfit with knee-high red stiletto boots. Mixed in with descriptions of Batwoman's hair color and wardrobe tastes is a one sentence mention that Batman is missing and presumed dead. Poor Batman goes up in a ball of flame in a helicopter crash and gets fried by a blast from an evil god, and no one really seems to care about his toasted corpse. However, a red-headed lesbian in a skin-tight black outfit and red high heel boots shows up to take his place, and it's all the press can talk about. How long before lesbian Batwoman meets President Barack Obama in the media event of the century? If that ever happens, people might just forget that there ever was a Bruce Wayne, whose parents' murder prompted him to put on a bat suit and fight crime. Somewhere, someone at Warner Bros. is likely trying to sign Lindsay Lohan to play Batwoman and Will Smith to play President Barack Obama in the third Batman film.