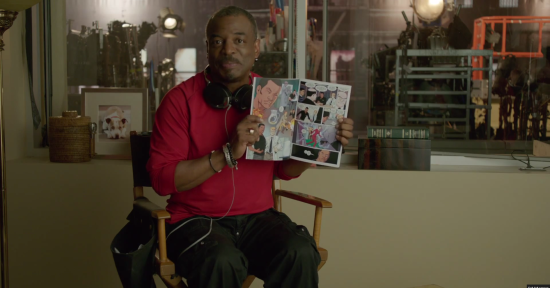 Burton, who took to Kickstarter last month in support of the veteran children's literary program he hosted for nearly 30 years, was aiming for just $1 million but is closing in on $4 million with three weeks to go.

The live events will be available as Kickstarter premiums, which means that existing pledges can alter their contribution to qualify or new donors can join the campaign at a level that grants them a Live! show. The four shows' guest breakdowns can be seen at right.

It does not appear that the shows will be filmed, so the one-day-only live shows are the only way to see the event. It's uncommon for stage shows to be filmed for commercial release due to union rules.

Burton, who also champions comics as a way to aid in the fight against illiteracy, explained the move on the Reading Rainbow Kickstarter page:

"Reading Rainbow Live! is a series of one-time-only events where I'm inviting you to bring your child and join us for a few hours. My friends and I will read from a few children's books. We'll all watch a classic episode of Reading Rainbow together, and everyone will go home with some special goodies. And afterward, there will also be a smaller Meet & Greet reception where a small number of families can join us to take photos, sign autographs and talk!

"These are going to be truly special events, so I hope you and your child will come out and join us. (And remember, we'll be readingchildrens' books -- so please use at least one of your three tickets to bring a child along!)

"We'll release tickets in three rounds, starting with a few 'Early Bird' discount tickets this afternoon at 2 PM PST. More will be available tomorrow at 11 AM PST, and a final round will be available on Friday at 1 PM PST."