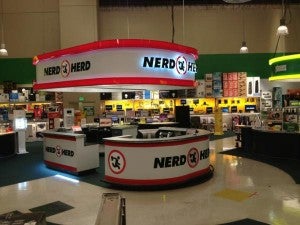 , NBC's hour-long drama about a computer-support tech who became a spy, was picked up at the end of last year for what was described at the time as its "fifth and final" season. The season was shortened, only 13 episodes rather than 24, but that had happened for Chuck a few times and eventually it has built up enough support to have full seasons each time. So far this year, ratings have been among the lowest in primetime, extinguishing the hopes of viewers who had hoped a last-minute rally might buy the show some more time. Tangled star Zachary Levi, who plays the titular super-spy, has now confirmed that principal photography is closed on one of the show's most iconic sets. Tweeting this photograph late last night, Levi said, "And that's a wrap on the Buy More. She was a good ship, and served us well." The cult-favorite show ends its five-year run on January 27, 2012 with a two-hour series finale.

Levi's Tweet Confirms The End is Near For CHUCK