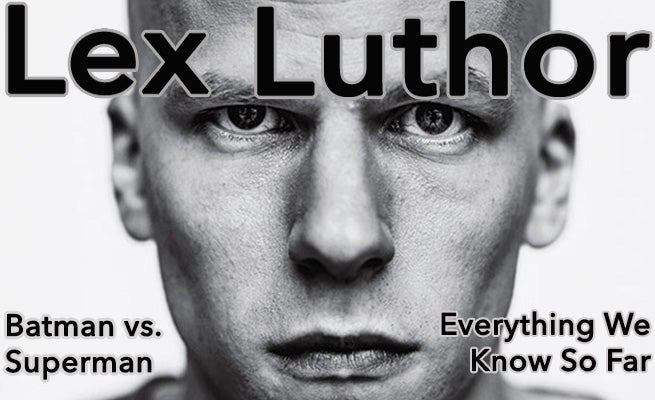 Earlier today, we got the first official look at Jesse Eisenberg as Lex Luthor from Batman Vs. Superman: Dawn of Justice. Bits and pieces of information and rumors have trickled out about the character since it was announced that Eisenberg would play the role.

Let's take a look at everything we know about Jesse Eisenberg's Lex Luthor role in Batman Vs. Superman: Dawn of Justice.

First of all, it looks like Lex Luthor will be around for a while in the DC Cinematic Universe. There are rumors of the character appearing in 2016's Suicide Squad, and Eisenberg has voiced his own desires to play Luthor in a standalone Superman sequel.

As for the version of Luthor we'll see on screen... It looks like we're going to get the manipulative genius Luthor from recent years in the comics. First of all, an image from the set of Batman Vs. Superman in the Detroit Free Press surfaced a while back, showing a location called "Ralli's Diner." In an 80's comic, "Metropolis 90 Mi," Lex stops at Ralli's Diner and poses an intriguing question to his waitress. His proposal is that he'll give the woman one million dollars to "stay with him" in Metropolis for a month. He tells her she has 10 minutes to think about it and he'll be waiting in the car. Before the 10 minutes are up, Lex leaves. His driver, Cynthia, asks why they left early and he tells her that it was only to torture the poor girl and leave her thinking about what could-have-been for the rest of her life.

Eisenberg is no stranger to psychological masterminds. In both The Social Network and Now You See Me, Eisenberg plays manipulative characters who want to be in constant control of their situation. Maybe, we should have never questioned the casting of Eisenberg as Luthor in the first place.

Then there's the question of what Lex Luthor's role will be in Batman Vs. Superman. At ComicBook.com, we've heard that Lex will be searching for Kryptonian remains and artifacts left behind from the events of Man of Steel. One way or another, he comes up with Zod's body and begins experimenting on it, likely in hopes of finding a weakness so he can defeat Superman. This fails when he triggers the body's "Doomsday genome." Zod reanimates as a mindless killing machines and eventually transforms into the full, bones bulging through the skin, Doomsday monster. This can make for incredible fight scenes, seeing as Doomsday would be one of few villains capable of going toe to toe with Superman, and possibly the Death of Superman story line somewhere down the line.

Another theory that coincides with this one, is Lex finding Zod and using his Kryptonian armor to create his well-known green and purple suit. It will be interesting to see Bruce Wayne's reaction to all of this if it is the case. Don't be surprised if Bruce has his very own collection of Kryptonian artifacts before Luthor does.

Please, don't take this as fact for what will happen in Batman Vs. Superman. At this point I would still label it as speculation, although does make sense. Michael Shannon, who plays Zod, was around the set according to an Instagram photo of him with Henry Cavill in Chicago. It's possible he filmed the parts where his body is recovered and became a mindless murdering maniac (not too unlike his Man of Steel role), only to be replaced by a stunt double, larger body, or CGI for the full Doomsday monster.

Of course, we all want to know when the trailer will come. Warner Brothers has a mystery panel at Wonder Con in Anaheim next week. I smell a teaser in the near future.

Lex Luthor: Everything We Know So Far About The Batman Vs. Superman Character