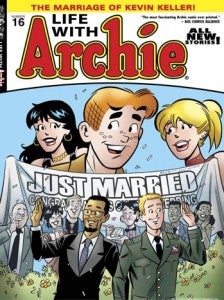 The controversial "Life With Archie" #16, which features a gay wedding, has sold out according to Archie Comics.  I suppose the sell out really isn't a surprise, seeing how much press—both good and bad—the issue has garnered. Major news outlets, including Fox News, ABC News, CNN and Reuters jumped all over the story, leading to a storm of criticism of the comic book.  The conservative group One Million Moms called for a boycott of the issue, as well as retailers such as Toys-R-Us which carry the comic book.  And, like all controversial topics, it just lead to the selling of more copies. "Life With Archie" #16 centers on Kevin Keller, the first gay character in Riverdale.  Keller, a military veteran, met his black husband while serving in Iraq.  (No word on whether or not any anti-mixed marriage or Aryan Nation-type groups boycotted the issue).  If folks think that Keller is going away, think again. "Kevin will always be a major part of Riverdale, and we're overjoyed, honored and humbled by the response to this issue," said Jon Goldwater, Co-CEO of Archie Comics. "Our fans have come out full force to support Kevin. He is, without a doubt, the most important new character in Archie history. He's here to stay." The issue is the most recent in a series of issues by the publisher which pulls controversial topics from the headlines.  Our own Russ Burlingame will have more on this strategy later this week. [phpbay keywords="kevin keller marriage" num="3" siteid="1" sortorder="EndTimeSoonest" templatename="columns" columns="3"]