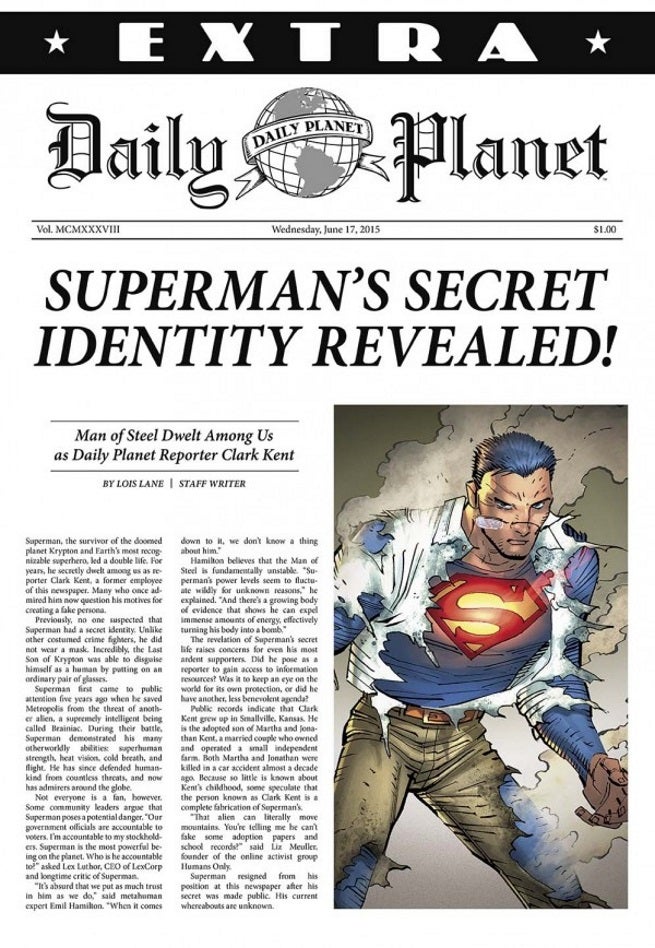 As part the publisher's DC You marketing push, DC Comics has been providing some comic book stores with in-universe artifact items to distribute to customers, such as a Black Canary tour poster. Another is the Daily Planet article, written by Lois Lane, that outs Clark Kent as Superman. The article was mentioned in Action Comics #41, the first post-Convergence Superman comic.

The poster has been uploaded to the Internet, for easy accessibility. Here's the text (via Bleeding Cool):

Superman, the survivor of the doomed planet Krypton and Earth's most recognizable superhero, led a double life. For years, he secretly dwelt among us as reporter Clark Kent, a former employee of this newspaper. Many who once admired him now question his motives for creating a fake persona.

Previously, no one suspected that Superman had a secret identity. Unlike other costumed crime fighters, he did not wear a mask. Incredibly, the Last Son of Krypton was able to disguise himself as a human by putting on an ordinary pair of glasses.

Superman first came to public attention five years ago when he saved Metropolis from the threat of another alien, a supremely intelligent being called Brainiac. During their battle, Superman demonstrated his many otherworldly abilities: superhuman strength, heat vision, cold breath, and flight. He has since defended humankind from countless threats, and now has admirers around the globe.

Not everyone is a fan, however. Some community leaders argue that Superman poses a potentialdanger. "Our government officials are accountable to voters. l'm accountable to my stockholders. Superman is the most powerful being on the planet. Who is he accountable to?" asked Lex Luthor, CEO of LexCorp and longtime critic of Superman.

"It's absurd that we put as much trust in him as we do," said metahuman expert Emil Hamilton. "When it comes down to it, we don't know a thing about him."

Hamilton believes that the Man of Steel is fundamentally unstable. "Superman's power levels seem to fluctuate wildly for unknown reasons," he explained. And there's a growing body of evidence that shows he can expel immense amounts of energy, effectively turning his body into a bomb."

The revelation of Superman's secret life raises concerns for even his most ardent supporters. Did he pose as a reporter to gain access to information resources? Was it to keep an eye on the world for its own protection, or did he have another, less benevolent agenda?

Public records indicate that Clark Kent grew up in Smallville, Kansas. He is the adopted son of Martha and Jonathan Kent, a married couple who owned and operated a small independent farm. Both Martha and Jonathan were killed in a car accident almost a decade ago. Because so little is known about Kent's childhood, some speculate that the person known as Clark Kent is a complete fabrication of Superman's.

"That alien can literally move mountains. You're telling me he can't fake some adoption papers and school records?" said Liz Meuller, founder of the online activist group Humans Only.

Superman resigned from his position at this newspaper after his secret was made public. His current whereabouts are unknown.

The ramifications of Superman's outing will be further explored in the "Truth" storyline being told in Action Comics, by writer Greg Pak and artist Aaron Kuder, and in Superman, by writer Gene Luen Yang and artists John Romita Jr. (Romita's cover for Superman #41, the first post-Convergence issue of the series, is used as the article's accompanying photo).