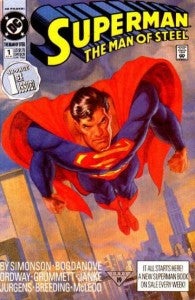 With about a month to go in his Kickstarter campaign, longtime Superman: The Man of Steel artist Jon Bogdanove's Strongman could use a herculean lift.

It's a project on which he's working with his son, Kal-El Bogdanove, and their collaborator Chris Faiella--but more than that, it's the culmination of something that began as a video game pitch and has become a comic book after a long gestation period. They're funding it via Kickstarter, but as Kal-El explained to us during San Diego Comic Con International, there's a bit of sticker shock on the part of some would-be donors who don't understand that folks like letterers and colorists are criminally underpaid in mainstream comics, and that with Strongman they're hoping to compensate the creators who work with them a bit more fairly.

They're shooting for a $200,000 goal, and weren't totally sure whether launching over Comic Con weekend would be a boon ("Hey! Everybody's talking about comics! Great!") or an obstacle ("Hey! Everybody's talking about Guardians of the Galaxy and doesn't care about our indie book!"), but Bogdanove appeared not only in a "Spotlight On..." panel, but also at a panel put together for the Post-Crisis Superman creators as part of Superman's 75th anniversary festivities at the convention.

Before the show began, though, we talked with him about Strongman, but wandered quite a bit into Kryptonian wilds. You can check out some of his reminiscences about the Man of Steel below, along with how they've informed his current work. 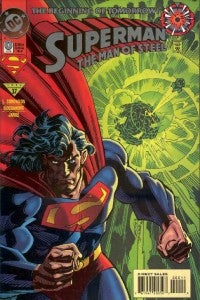 ComicBook.com: When we last spoke, we talked a lot about the importance of the supporting cast in Strongman and how it helps to give context to the central character and his struggles. It struck me, because I remember when most of the crew that you did Superman with for all of those years left, there was a bit of business in Wizard: The Comics Magazine about how "This is going to be Superman's world now--the supporting cast gets far too much play." And ever since then, I've felt like Superman has lost a lot, and it's felt a bit more generic, in the absence of those interesting and diverse voices.

Jon Bogdanove: I agree with you, but I think also that one of the troubles when writing a tough-guy hero is that you can't have the tough guy moping on about his woed and feelings. Because tough guys don't do that, right?

And I hate an angsty Superman. I just don't like an angsty superhero to begin with. It makes sense with Peter Parker because he's an adolescent, but when it comes to a character who's essentially a paternal archetype like Superman, it just doesn't do for him to be all worried about whether the world is ready for him or not, or to have his hand nailed to the back of his forehead about stuff.

So it's essential to have supporting characters around him to express what he's feeling. For instance, a good example of this was in one of the recent Bond movies, it's up to M to say, "Bond, you need some rest, you look like crap." Bond's not going to say, "Man, I'm really tired." Somebody else has to say it for him, and that's just Tough Guy Writing 101.

The tough guy does what the tough guy needs to do. He doesn't dwell on his problems, so it's vital to have an interesting supporting cast to give you a window to and a handle on the tough guy character. 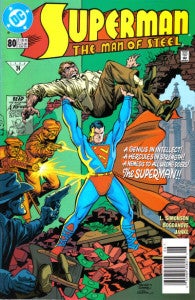 ComicBook.com: The other thing that I noticed as we were talking about the episodic nature of the stories you're telling is that it once again calls back to a kind of more Golden Age sensibilities in terms of the idea of creating consistency without continuity. To me, that seems like it went out the window at the start of the Marvel Age.

Bogdanove: Well, yes and no. Certainly continuity-based comics arrived with the Marvel Age but if you actually look back at vintage Marvel--any story by Kirby or Ditko generally speaking is self-contained. There were actually comparatively few multi-issue arcs. "The Coming of Galactus" is what? Two issues? And that was the biggest event ever in comics at its time.

There was none of this stuff where there was like a year of continuity and in order to know what was going on you had to know what happened a year before. There was none of that. As a kid, I was able to jump on Fantastic Four right in the middle--I wasn't there in the beginning--and I got satisfying resolutions in every issue. It doesn't mean there wasn't a larger world. I mean, I loved the idea that the Fantastic Four and Spider-Man and Hulk all lived in the same world and hung out in the same New York. But issue to issue, the bear of the week was defeated and things went back to normal, generally speaking. They existed in a larger world but you didn't have to be slaves--there wasn't this sort of cynical effort to force readers to buy everything. They were just stories. Stan and Jack sort of started this connected continuity thing but it didn't get out of control until years later.

ComicBook.com: I vaguely remember feeling that yours and Louise [Simonson]'s Superman: The Man of Steel stood alone in that regard a bit; that you guys had your own thing going that was, as often as not, more character-driven than plot-driven even when things were crazy in the weekly Super-grind. 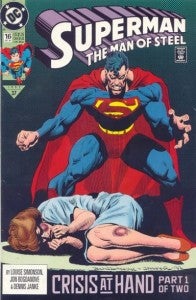 Bogdanove: Well, I mean honestly credit for that has to go to Weezie and to Mike, actually. Carlin really did try to encourage all of us to have that structure. He really wanted us to each spend a certain amount of pages every issue pushing the big arc forward and the rest of it on our own individual stories.

So we'd throw a page or two in to edify what was going on in other people's books and a few pages in to advance the big, overarching plot and then the rest of it, we were encouraged by Mike to do our own thing and try to make individual issues satisfying and have resolution. And because Weezie is, in fact, a great writer and also understands it from the editorial side as well, she was able I think to consistently walk that fine line at edifying the other books, advancing the big continuity arc, but also giving people who just read Man of Steel something satisfying and self-contained every month. I can't take credit for that; that's purely Louise and Mike Carlin.

ComicBook.com: I remember thinking at the time that your storytelling was really good--that was key to winning me over since you were so different from the other three pencillers working when I first came on board as a reader.

Bogdanove: Thank you for those kind words. Sometimes I look back at some of that stuff and I think I was a little too far out in left field. There are distortions that took place in my work in the heat of creation that I sometimes look back and wish I could just...you know, I wish I could have reined in his chin a little bit. [Laughs]

There are also times where--I love characters that emote. There's a lot of animation in my work. So I use squash-'em, stretch-'em expressions that tend toward cartooniness to compensate for the fact that these are still pictures. And there were times on those books where I look back now and I think, "Ah, Bogdanove, what the hell were you thinking?" 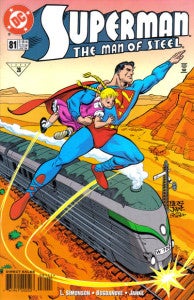 ComicBook.com: I think that's healthy, right? I mean, when you're on any book for such a long time, and especially a high-profile book that everyone's watching all the time, you've got to eventually hit that patch where you later say, "Man, what I wouldn't give to have those six issues back."

Bogdanove: Well, yes--and God! [Laughs] That certainly happened on the Superman books for all of us, particularly those who stayed. Most of the time, honestly, you're just working so hard and so fast to try and make your deadlines that if you do something that makes you cringe, you're probably not going to cringe about it until you've had time to slow down enough to look at it, which is going to be long after it's exposed to the world.

It's good and bad. There's an energy that certainly Jack [Kirby] utilized of having to get it out--bam!--having to get it out. Draw it and move it out--where you sort of remove all of the governors between the id and your imagination and what ends up on the page. You don't have time for a lot of editing subroutines; it just has to come right from the heart, splat out onto the page, as quick as you can. That can produce some very real, heartfelt connections between fans and the work because the world sees what's direct from the id. But it can also create a situation where mistakes happen and accidents happen. You can even look back at some of Jack's stuff and say, "You know? Maybe he should only have been drawing five books that month." [Laughs]

ComicBook.com: Is it nice to launch the week of Comic Con at a time when Superman creators are so present in everyone's mind?

Bogdanove: I hope it works out that way. It's a bit of a coincidence that this is the year the twentieth anniversary of the Death of Superman, it's the 75th anniversary of his creation, so us Death of Superman guys are sort of having our curtain call of the 15 minutes of fame. I realize that's a fleeting opportunity, but this is the year we're featured guests at San Diego, there's a lovely exhibit up in San Francisco at the Cartoon Art Museum, so we're having a mini-Renaissance.

Strongman has been cooking around on the back burner for some time but it's sort of coincidence that it's at this moment of our mini-Renaissance when the last Superman project that I pitched to DC was passed on by Dan DiDio. Otherwise this year, I'd be doing Superman Noir. But Superman Noir didn't fly and I'm trying to figure out what else I wanted to work on--where else is the passion?

I don't know about you but I can't invest that many hours and that much time and life energy into a project unless I really care about it--which is probably why I stayed on Superman too long. And really the top of the list of projects that didn't require me to somehow sell them to one of the companies was to do a creator-owned thing and the top on the list of creator-owned stuff to do was Strongman, partly because that's what I really want to do and that's what I really love and partly because I get to work with Kal-El and Chris.