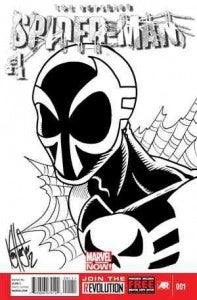 Following on the heels of an intriguing tweet by Dan Slott, where the writer appeared to let the cat out of the bag and suggest that Miguel O'Hara -- also known as Spider-Man 2099 -- is The Superior Spider-Man, the character is now appearing on a sketch variant cover being sold by Dynamic Forces.

Artist Ken Haeser will sign, sketch and remark the cover, which will ship in February when the book relaunches.

Meanwhile, rumors that O'Hara might actually be featured on the pages inside have all-but-disappeared, with a report coming out a couple of weeks ago that someone at Marvel had denied it outright. As such, it's likely that Haeser will be the only one providing such a 2099 cover for the series.

UPDATE: CBM has spotted a second, similarly Miguel-tastic variant, which you can check out below. 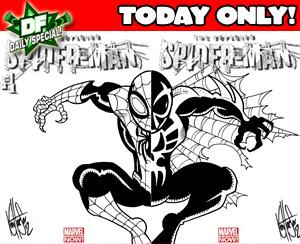 Look Who's on the Cover of Superior Spider-Man #1