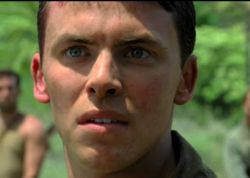 On Wednesday, the creators of Lost pulled off one of the greatest fake outs in television history. The week before, I reported that British actor Tom Connolly was joining the cast of Lost for a pair of episodes as a character named "Jones". One of the episodes in question, titled Jughead, appeared this past Wednesday on ABC and, as reported, the actor appeared in the episode. But, his character's name sure wasn't Jones!

Connolly's character, an Other, winds up being captured by Locke, Sawyer, and Juliet, when the trio gets time warped to the 1950s. After some quick detective work by Juliet, the group discovers where Richard and the Others are stationed. As Locke tries to mediate with Richard, Connolly's character protests to the leader of the Others to not trust Locke. At this point, Richard tells him to stuff it and then the real shocker comes in, as 'Jones' is actually revealed to be Charles Widmore!!!! SAY WHAT!?! That's right, I said Charles Widmore.

This coup proves that when it comes to keeping a secret, the creators of Lost are geniuses. By giving Connolly's character an alias and then having the deception posted on the Internet Movie Database, the show's creators kept the reveal under wraps as the news broke that the actor would be joining the cast. When it was reported earlier last week that the producers of Lost had hired Connolly to play a character named Jones, several websites, including this one, were fooled. Thus when Wednesday rolled around, instead of a minor character being introduced, fans got the shock of the season when it was revealed that Widmore used to be an Other.

In an age where the Internet prevents hit shows from keeping plot details under wraps, the Widmore reveal ranks up there with Henry Blake's death on M*A*S*H*, the entire series of Newhart being just a dream, and George Clooney's cameo on ER, as one of the best TV secrets ever kept.

Apparently, nobody has told the IMDB to correct the bluff. As of 11:30 AM EST today, Tom Connolly's character is still listed as Jones instead of Widmore.