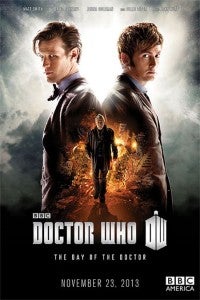 According to a new report,  over 100 Doctor Who episodes that were previously considered lost forever have now been found. In an exclusive, The Sunday People is reporting that a group of Doctor Who fans actually discovered at least 100 lost episodes of the show in Ethiopia. The 100 plus lost Doctor Who episodes were reportedly gathering dust at the Ethiopian Radio and Television agency. The episodes are said to be from the sixties, featuring the first two doctors William Hartnell and Patrick Troughton. They feature such scenes from The Crusade, The Enemy of the World and The Ice Warriors series.While there has been no official announcement from the BBC, The Sunday People is reporting that the BBC hopes to announce the find of the lost episodes during Doctor Who's 50th ­anniversary celebration next month. The episodes will then likely be digitally remastered and show again either on television or released on DVD. The Sunday People quotes Doctor Who expert Stuart Kelly as saying, "I was told by a friend that the ­episodes have been found in Ethiopia. The BBC is ­negotiating to get them back right now. I really can't say any more than that."The 50th anniversary episode of Doctor Who is set to air on November 23, 2013.