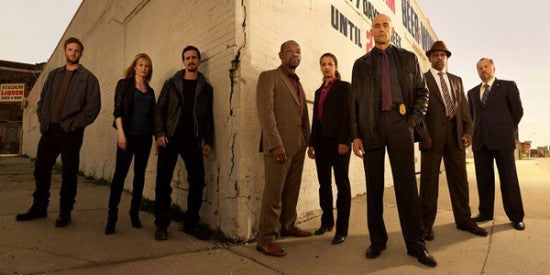 In a move that some fanboys might see as clearing the path for Mark Strong to take on the role of Lex Luthor in Batman vs. Superman, AMC has decided not to renew its drama series Low Winter Sun, which starred Strong and The Walking Dead recurring guest star Lennie James. In the series, Strong played Frank Agnew, a character he'd originated in the first Low Winter Sun, which aired in two parts on British TV. While hits like Mad Men, Breaking Bad and The Walking Dead seem to have made AMC fairly bulletproof, this is the second notable cancellation they've made recently; the first, bringing The Killing to an end, didn't last long before Netflix picked up the series for a final season. That's unlikely to happen in this instance, though; The Killing was a special case in that it was a cult favorite and its third season garnered the most critical acclaim it had seen up to that point before ending on a note that begged for a follow-up. Cancellation would have left its small but fiercely loyal following with unanswered questions, while a shortened fourth season straight to Netflix allows the popular streaming service to market directly to the series' fan base. Low Winter Sun had ratings roughly comparable to The Killing for part of the season, but word of mouth was weak and in spite of a brisk promotional campaign from AMC and a strong lead-in (in the form of the final season of Breaking Bad), mediocre reviews and consistently falling ratings make it a poor candidate for resurrection. The Killing, for instance, debuted to 1.76 million viewers on AMC in its third season and hovered around 1.5 million all season long, ending with 1.48 million. Low Winter Sun opened the season with an impressive 2.5 million viewers for its premiere, but they shed more than a million of those the following week and by the time the season ended, it had a meager 630,000 viewers. iTunes and Amazon also offered free downloads of the series premiere in the weeks after it debuted in the hopes of retaining some audience figures, but every episode lost viewers until the tenth and final, when it tied the ninth.