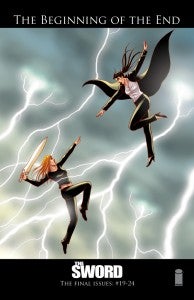 Fan favorite revenge series The Sword, published by Image Comics, will officially begin its final story arc this August with issue number nineteen. The Luna Brothers, creative force behind the series, which centers on a young woman seeking revenge for the murder of her family, have promised some exciting twists and turns leading up to the series' conclusion. Writer Joshua Luna had this to say about the direction of the series, "rom the moment we started working on this series, we've always had a very specific ending in mind. So, it's been incredibly fun, dropping little hints and working towards the payoff, issue by issue. I think readers will be surprised to see how it ends." Joshua and his brother Jonathan, artist for the series, have promised to reveal a limitation to the power that the heroine of the series, Dara Brighton, possesses, which will directly play into the final events of the series. Look for the final issues to begin appearing on store shelves late this summer!