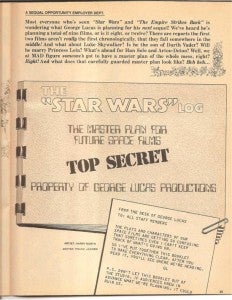 With news of more Star Wars movies on the way, the past is becoming popular again. Fans are digging up old Star Wars interviews and old Star Wars references in magazines in hopes of gleaning any information about the new trilogy.

In addition to a Maria Shriver interview with Mark Hamill, another Star Wars blast from the past that has become popular on Reddit is a scan of an old copy of Mad Magazine. In this Mad Magazine from 1982, Mad Magazine mentions that they’ve heard that George Lucas is planning a total of nine films.

Many are taking this as additional confirmation that George Lucas always planned nine films, but what is even more interesting is that Mad Magazine also accurately predicts Star Wars expansion beyond even nine films.

In their Top Secret Master Plan For Future Space Films from George Lucas, Mad Magazine lays out a plan for a series of 12 films. Mad Magazine also goes on to predict, “The last film serves as the climax to the ‘Star Wars Saga – Part I.’ Immediately after it is completed (we figure that to be sometime around the year 2014), we will begin work on the 24 films that make up the ‘Star Wars Saga – Part II.’”

In the conference call announcing the Lucasfilm deal, Disney Chairman and CEO Bob Iger said, “In 2015, we’re planning to release Star Wars Episode 7, the first feature film under the Disney/Lucas brand. That will be followed by Episodes 8 and 9, and our long term plan is to release a new Star Wars feature film every two to three years.” Mad Magazine’s prediction of ongoing Star Wars films stretching into the foreseeable future seems to be coming true.

Mad Magazine’s Master Plan also makes a big deal about how the films are out of order, poking a little bit of fun about how sometimes it’s so confusing even George Lucas can’t keep track of what’s going on. During the Disney conference call, Bob Iger also had to take special care to explain the numbering of the movies. Iger said, “What we’re buying along with the overall company is a pretty extensive and detailed treatment for what would be the next three movies, the trilogy. We’re going to release the first of those three in 2015 and then the expectation is that we’ll release numbers 2 and 3, which will be numbers 8 and 9 in the overall franchise probably on the cadence of every other year.” Did Disney get their master plan from Mad Magazine?