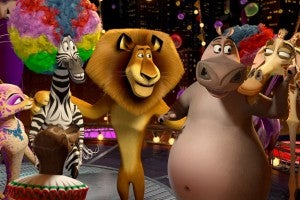 With two movies opening at over $50 million last weekend and this week's new major offerings--Rock of Ages and That's My Boy--expected to turn in decent numbers in their opening frame--there was a bit of cheerleading earlier this week that suggested 2012's summer box office slump might be over.

Well, roll back those expectations just a bit; the studios have just come back with some pretty bleak numbers.

Last week's #1 film, Madagascar 3: Europe's Most Wanted, kicked off its second weekend with just over $10 million yesterday, but that was still enough to easily hold onto first place, according to estimates provided to Box Office Mojo. The two big openings both came in substantially below expectations; Rock of Ages made $5.35 million and That's My Boy made only $4.6, putting it on pace to be Sandler's worst opening since Spanglish. Spanglish, though, was a dramedy that appealed to critics, giving it some legs where That's My Boy has none of that going for it.

In spite of dropping over 70% in its second weekend, Prometheus is so far retaining the #2 spot. That #2 spot, though, won't stop the stinging pain the studio feels from such a substantial second-week drop. Box Office Mojo's Ray Subers tweeted this morning that the 72.9% drop from Friday to Friday is actually worse than the one suffered by Green Lantern last year. Green Lantern has since been synonymous with poor reviews and low box office, so that drop might be bad news for those hoping Prometheus would get a sequel to answer all of its many questions.

It's expected that these numbers will hold for the weekend, with Snow White & the Huntsman rounding out the top five, but with a $4 million Friday and better word-of-mouth behind it, The Hollywood Reporter is guessing that the Kristen Stewart vehicle might topple Adam Sandler's flop before the weekend is through. While original projections had both of those films opening somewhere in the neighborhood of $25 to $30 million, it now seems unlikely either of them will break $20 million.