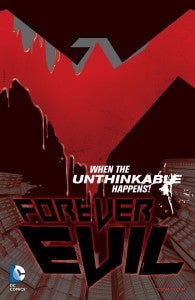 John Cunningham, DC Comics's Vice President of Marketing and the moderator of a panel at Fan Expo today in Toronto, told the audience there that "the internet is going to explode on September fourth, and it’s all going to be about Nightwing."

The hero, one of only a handful of non-villain characters who will get a spotlight during September's "Villains Month," has been spotted in preview pages for Forever Evil #1, the first chapter of Geoff Johns and David Finch's crossover story that begins that day. For a while now, DC brass have impressed on fans at every opportunity that Nightwing will be a major player in the DC Universe during and immediately after that storyline, but this new piece of information suggests that whatever it is Dick Grayson is wrapped up in, it will begin in less than two weeks, when the miniseries kicks off.

Because Nightwing was the original Robin, he--or rather, his secret identity, Dick Grayson--has more penetration into mainstream media than most non-A-list superheroes. If something happens with Dick, it's fairly likely that outlets who rarely cover comics would take an interest, likely pursuing the Robin angle. It's also worth noting that in the promotional image at right, we get not only his New 52 logo, which resembles the costume the character wore as Robin in the 1997 flop Batman & Robin, but beneath it appears to be the logo Nightwing wears in the DC Animated Universe TV series like Batman: The Animated Series and Justice League Unlimited.

Last week, Nightwing writer Kyle Higgins took to Twitter with a couple of tweets suggesting that he was watching Batman: The Animated Series for reference for work (although as the writer of DC's digital-first Batman Beyond, the two things might be unconnected).