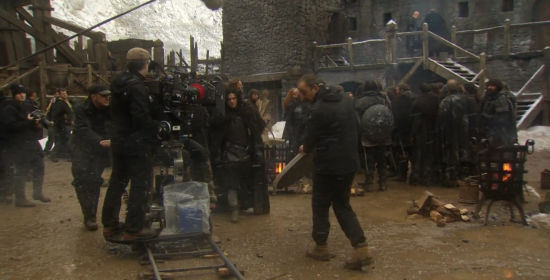 HBO has a released a short “Making Game of Thrones” video on their website. The video features production designer Deborah Riley discussing her role and responsibility to the show.

Season 4 will be Riley’s first season as the show’s production designer, following in the footsteps of Gemma Jackson, the production designer for Seasons 1-3. Riley explains that Jackson’s work really set the tone for the show, and that she hopes to take the work forward to create “new worlds” in Season 4.

“On a show like Game of Thrones, you don’t get a better sandbox to play in.” she says. “It’s like extreme art department.”

Driving home the scale of the production for Season 4, Riley says that they built 105 brand new sets for the show, in addition to sets being reused from previous seasons. That’s pretty impressive.

You’ll be able to see Riley’s hard work realized when Season 4 of Game of Thrones premieres on HBO on April 6.