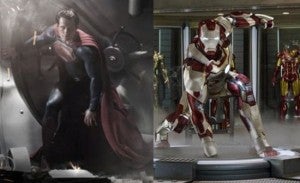 might not have scored with critics, but it's making a killing at the Yahoo! Movies 2013 Ultimate Summer Movie Poll.

Iron Man 3 came in second place in a lot of these categories (although surprisingly, it came in third behind Kick-Ass 2 in the comic book movie category). It did win Best Action Sequence, for the destruction of Tony Stark's house and Biggest Shocker for the Mandarin twist, which sounds like a delicious soft drink tie-in.

Chloe Grace-Moretz won Baddest Babe for Kick-Ass 2, another movie that came in near the top of voting in a handful of categories. You can check out the rest of the results and see how well your favorite second- or third-place finisher stacked up against Man of Steel at the official site for the poll.