In a new Man Of Steel TV spot airing in the UK, Warner Bros. might have provided fans with their first look at Lex Luthor. While it’s unknown for sure if Lex Luthor will  even appear in Man Of Steel, there has been considerable evidence supporting the likelihood that he will be in the movie.

First, Man Of Steel writer David. S. Goyer corrected a reporter who indicated that Lex Luthor wasn’t in Man Of Steel. Goyer said, “I don’t think anyone has ever confirmed that we haven’t included him.” Then, Ain’t It Cool News went 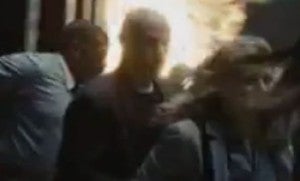 At the twenty-five second mark in the Man Of Steel TV spot embedded below, a bald-headed man is shown running out of the Daily Planet building with Perry White, Jenny Olsen, and Steve Lombard. The bald-headed man looks a lot like Mackenzie Gray.

Could this brief footage of a running bald man be the first look at Lex Luthor in the Man Of Steel? It would make sense that if Lex Luthor is portrayed as a businessman in Man Of Steel that he might be at the Daily Planet conducting business, when an attack by General Zod occurs.