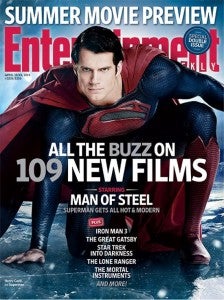 While it’s long been rumored that Man of Steel would lay the groundwork for a Justice League movie, Warner Bros. President Jeff Robinov confirms it in the Entertainment Weekly Summer Preview issue.

Robinov tells EW, “It’s setting the tone for what the movies are going to be like going forward. In that, Man of Steel is definitely a first step.”

While Christopher Nolan’s Dark Knight trilogy was specifically positioned to exist in a stand-alone world, Robinov says, “What Zack and Chris have done with this film [Man of Steel] is allow you to really introduce other characters into the same world.”

However, Man of Steel writer David S. Goyer was a little more tight-lipped. When asked if there would be any direct references to the other Justice League members in Man of Steel, Goyer replied, “I would love to tell you yes or no, but I think it’s going to be more exciting for people to keep a beady eye out and find what they can find.”

Of course with the writer dropping a tease like that, it’s almost for certain that there will be some references to other DC Comics superheroes in Man of Steel. While it might not be another hero actually appearing, we’re betting there could be sly references to other cities or organizations that connect other DC Comics superheroes to the Man of Steel world.

Man of Steel is scheduled to be released at movie theaters in the United States on June 14, 2013.