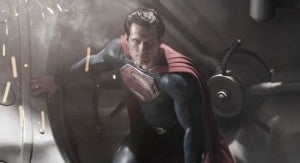 6. First Man Of Steel Footage Will Premiere At 2012 Comic-Con – This rumor is more just one of those things that makes sense. Big budget comic book movies often premiere their first footage at San Diego Comic-Con so they can start to build buzz. The timing is just right for Warner Bros. to unveil the first Man of Steel footage as a treat for 2012 Comic-Con attendees.

4. War On Krypton – According to Comicbookmovie.com, unnamed insiders have revealed that a good portion of the Man of Steel will take place on a war ravaged Krypton. While just a rumor, Russell Crowe is playing Jor-El, so it does make sense that Warner Bros. might want to include a lot of Krypton footage to give the star lots of screen time.

3. Superman Fights In Slow Motion – Ok, so everyone knows the slow motion technique that Zack Snyder is famous for using in fight scenes in movies such as 300. Did he use this same slow motion technique in Superman? According to an IMDB poster claiming to have seen footage of two early scenes involving a tornado and a fight with Zod, Zack Snyder does indeed use this technique in Superman.

2. Superman Is A Prince – In keeping with the tradition of making radical changes to superhero origins in the movies, there is a rumor that Superman will be portrayed as a lost Kryptonian prince, who is prophesized to save the world. This rumor comes from ThinkMcFlyThink.com who claims that it’s a concept that Warner Bros. salvaged from the J.J. Abrams Superman: Flyby script.

1. Superman Cameos In The Dark Knight Rises – This one goes all the way back to the Superman logo showing up in the first Dark Knight Rises poster. Was the Superman logo planted there as a hint that Superman will make a brief appearance in The Dark Knight Rises? While it might seem out of the ordinary for Christopher Nolan to introduce another superhero into his Dark Knight world, it is the last Batman movie so why not go out with a bang. Marvel Studios has shown just how successful building up anticipation with after the credits scenes can be, so why shouldn’t Warner Bros. take a play out the Marvel Studios playbook?