The Zack Snyder-directed Superman reboot may be nearly a year away, but it's already generating a ton of conversation and speculation on the Internet. ComicBook.com wanted to brainstorm some of the big, obvious questions raised by the new trailers and to see whether we could answer them.

The death of Superman's adoptive father has become a major part of his story in recent years; the way he coped with losing Jonathan Kent is something that's been told and retold, from All-Star Superman to Smallville to Geoff Johns' fan-favorite run on Action Comics.

And in the world of the New 52, which most are assuming will have at least a passing similarity to the movies DC plans to put out in the near future, both of his parents have already passed away before Clark ever puts on the cape and starts leaping tall buildings.

That shot of a young Clark and his father at the science fair, though? That's not a newspaper clipping or anything; it's something in a scapbook, and the way that hand is laid over the image, it seems rather wistful. In spite of the apparent focus on Clark's fathers in the film, will both of them be gone before the story really gets moving? 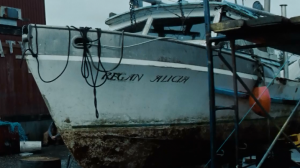 Is there any significance to "Regan Alicia?"

The name of the boat that the camera slowly pans past during part of the trailer, "Regan Alicia" is clearly visible on its hull for more than a couple of seconds. It seems as though that name might have some relevance to the movie, although if it does, it doesn't appear to be spinning out of any existing part of the Superman mythology. A Google search of the term with Superman's name attached yields zero results.

Well, there's nothing much in the trailer that clues us in on this one, but I'm guessing it's one of two things, or maybe a combination of both:

In the Comic-Con footage, we heard someone say that they "saw what Clark did" while using his powers to save a school bus. That could be a motivation for him getting out of Smallville and away from the inevitable questions that would come if that person went public.

On top of that, recent reimaginings of the Superman story, including John Byrne's Man of Steel and Mark Waid's Superman: Birthright, have included a portion of the story that included Clark, before he ever suits up as Superman, traveling the world and experiencing it as an impoverished young man, developing skills that would later serve him both as a reporter and as Superman.

Around the world, he would begin saving people who needed it, but never sticking around to take credit or show his face, never elevating himself to the symbol of hope and inspiration that Superman becomes later. It's possible that both the part of the movie that happens at sea, and the next part we'll talk about, all happen during that period of Clark's life.

Is the Fortress of Solitude at the North Pole?

In its original incarnation, Superman's Fortress of Solitude was described as being hidden away in the Arctic. More recent interpretations have relocated it around the country into other hard-to-reach places, with the South Pole being the longest-lasting and most well-known of those, possibly because placing it in the Antarctic separates it from easy jokes about Superman hanging out with Santa Claus at the North Pole.

In any event, during the trailer we see Clark hitchhiking, and the surroundings and signage look quite a lot like Alaska to my eyes. Could it be that in the early days of the film, when he hadn't yet discovered his ability to fly, Clark hitchhiked North to find out the truth about himself at his polar headquarters? Seems likely. 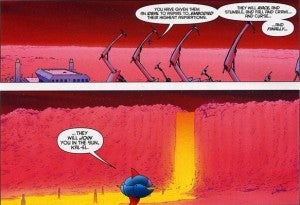 What is the meaning of the dual voiceover messages from Jor-El and Jonathan?

Well, this is a question I got from my editor, and there are a couple of different ways to answer it.

First of all, it's indicative of the ways that each views their son; Jor-El believes that humanity will fall in line behind Superman because he's so clearly their superior. Not knowing the kind of man his son will turn out to be, this sounds a bit like he's expecting Superman to rule the world, either benevolently or not, as a result of the powers granted by Earth's sun, but in any case, Jor-El expects great things of his son, and it's not as though he's got some kind of sinister motive; he does say that Clark will inspire people to greatness.

It's also (and here's an interesting thing Bleeding Cool dug up) an almost word-for-word lift from All-Star Superman by Grant Morrison and Frank Quitely. One has to wonder how much this "grim and gritty reboot" will be influenced by that fantastical, bright and shiny series.

Jonathan, meanwhile, sees his son as a human first.  He offers something that Jor-El doesn't really seem to understand: a choice. While we all know that Kent has raised his son in such a way that Clark won't turn out to be a bad guy, Kevin Costner's monologue allows for the possibility, saying that his son has to make that choice for himself, and cautioning that whatever choice he makes will change the world.