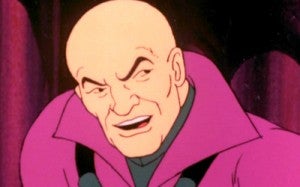 Following on the heels of a Superman franchise that couldn't go a single film without Lex Luthor showing up to terrorize the Big Blue Boyscout, Zack Snyder's decision to use General Zod and the Phantom Zone criminals as the principal antagonists in Man of Steel was met with a fairly warm reception from most fans.

Still, everyone knows Superman's world just isn't the same without Lex Luthor. So...where is he?

Well, remember how we were just talking yesterday about someone who had seen the movie and loved Zod's performance? They're still talking, and further down that same thread, they've provided a slightly spoilery revelation about where ol' Chrome Dome is these days...

"He's never shown but he is referenced in the way Norman Osborn is referenced in [The Amazing Spider-Man]. They state in the movie that he is working on a new AI that will 'revolutionize technology unlike anything Metropolis has ever seen'."

Not a great surprise; that's how most people we've talked to have expected Luthor to be handled. Still, some kind of tentative confirmation is nice, and the AI experiments are...interesting.

Certainly the obvious choice, especially because of their long and often complicated relationship, Luthor's experiments seem like the kind of thing that could be key to introducing and/or combating Brainiac in the next film.

If Luthor is key to the operation, and it's set to revolutionize Metropolis, don't be too surprised to see a take on the Y2K storyline, in which Brainiac tech transformed Metropolis into the "city of Tomorrow," something chock full of visuals that would be right at home in a Zack Snyder joint.

"Cutting the Cord" Has Messed With People's Ideas About Entertainment

Among Us Looks Perfect as an Old-School Game Boy Game

The Flash: How The Arrowverse's Most Popular Show Helped Shape the Future of Comic Book Movies