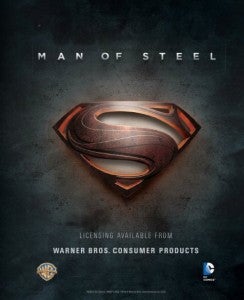 According to a report at Bleeding Cool, a press release by IMAX in advance of this week's San Diego Comic-Con International has revealed that Man of Steel, Zack Snyder's upcoming Superman reboot produced by The Dark Knight Rises filmmaker Christopher Nolan, will be released in 2D, 3D and IMAX 3D when it hits theaters in June 2013. Says the release, as BC has it:

"In the pantheon of superheroes, Superman is the most recognized and revered character of all time. Clark Kent/Kal-El (Henry Cavill) is a young twenty-something journalist who feels alienated by powers beyond his imagination. Transported years ago to Earth from Krypton, a highly advanced, distant planet, Clark struggles with the ultimate question ‘Why am I here?’ Shaped by the values of his adoptive parents Martha (Diane Lane) and Jonathan Kent (Kevin Costner), Clark discovers having extraordinary abilities means making difficult decisions. When the world is in dire need of stability, an even greater threat emerges. Clark must become a Man of Steel, to protect the people he loves and shine as the world’s beacon of hope – Superman.

The IMAX release of Man of Steel will be digitally re-mastered into the image and sound quality of The IMAX Experience® with proprietary IMAX DMR® (Digital Re-mastering) technology. The crystal-clear images coupled with IMAX’s customized theatre geometry and powerful digital audio create a unique environment that will make audiences feel as if they are in the movie."

bucked the trend of big-budget tentpole movies being shot in (or upconverted to) 3D, and some had speculated that Man of Steel would do the same, with both Snyder and Nolan having declined to use 3D in their recent projects. Studios, however, want 3D movies because of the extra couple of dollars each ticket brings in, and because the appeal of such films in the international market has been huge in the last few years. Nolan admitted that Warner Brothers had pressured him to film The Dark Knight Rises in 3D, but that he nixed it in favor of a consistent look between his three Batman films.

Since it wasn't mentioned until now that the film would be shot in 3D, it's likely that it was filmed in 2D and will be upconverted, a process that's controversial because it's widely believed the end product doesn't come out looking as good as it would if you had either shot it in 3D or just left well enough alone.

Man of Steel To Be Released in IMAX 3D