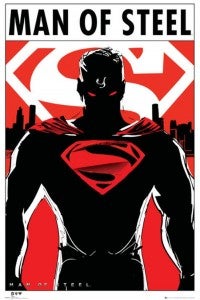 Suspiciously absent from the first two trailers for Man of Steel, Zack Snyder's hotly-anticipated Superman reboot, has been one simple but important word: Superman.

And then of course, tonight we get a third trailer wherein Lois Lane's attempt to give Kal-El a name is cut off, apparently by design, by one of the men observing with Emil Hamilton.

The question, then, becomes whether we will ever actually hear the name "Superman" uttered onscreen.

There's a case to be made, as there is with The CW Network's Arrow, that there's no real need to say the name when everyone already knows it, and that allowing it to develop organically will seem more "realistic." Still, plenty of fans aren't happy about the fact that nobody says "Green Arrow" on that series, too, so how will fans react if the most iconic superhero of all time doesn't get the "Super" in his feature film?

(Remember, also, that nobody used the word "Catwoman" in The Dark Knight Rises.)

Here's our guess: You won't see anyone call him "Superman," but once the battle is won and the smoke is cleared, the Man of Steel will be featured on a copy of the Daily Planet, "Superman" blasting out of a headline, and he'll be named--by Lois Lane, but almost by default. Once that's out there, it's hard to put the toothpaste back in the tube. Just ask Havok--does he really think people are going to start calling him Alex? But that's a whole other thing.

The balance of trying to make a movie that's "believable," versus doing a Superman movie which by design carried with it a lot of fantastical elements and some things that are simply too feel-good to feel "real," is one that Snyder and company have been tasked with trying to keep. From the trailers, it looks good...but don't expect any "It's a bird, it' s a plane" talk anytime soon.

Man of Steel: Will Anyone Say Superman's Name?

Which Dragon Ball Movie Villains Are Worthy Of A Broly-Style Resurrection?

Batwoman Fans Are Heartbroken About Ruby Rose Exiting the Show