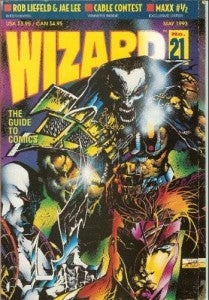 While shuffling through some old issues of Wizard: The Comics Magazine, our friends over at KryptonSite came to a rather surprising realization; the controversial decision to cast Laurence Fishburne as Perry White wasn't the first time Hollywood has wanted to make the character an African-American.

In a 1993 issue (#21, pictured at right), Wizard noted in an article about Lois & Clark: The New Adventures of Superman, "Viewers may be surprised by the new Perry White; he's black!" Of course, back then there weren't nearly as many people on the Internet to get angry about it.

(Or to ask what happened and why they went another way, when it ended up being Lane Smith who played the character on TV.)

Fishburne is a successful and respected actor, who has stepped into big shoes before with the CSI franchise...but he's one of a number of actors who have been blasted out of hand (like Jamie Foxx on The Amazing Spider-Man 2 and Idris Elba on Thor) when fans found out they'd been cast in traditionally white roles. Comic book readers, who tend to have been reading for a long time and are often averse to even mild change, are particularly irascible when it comes to this point.

Of course, while most of the actors just ignore it, every now and again you've got to have someone comment on it.

“Thor has a hammer that flies to him when he clicks his fingers. That’s OK, but the color of my skin is wrong?” Idris Elba  told Entertainment Weekly after learning of the controversy surrounding his casting in Thor. “I just had to comment on [the uproar] because I found it so ridiculous.”