According to the news and (often right) rumor site Latino Review, the "secret Marvel project" Sir Ben Kingsley will be taking on, as first reported last week, is pretty much exactly what many fans would have expected, and hoped for.

[Spoilers for Iron Man 3 ahead.]

That's right--according to El Mayimbe's sources, The Mandarin will get a One-Shot special, presumably attached to the home video release of either Thor: The Dark World or Captain America: The Winter Soldier. 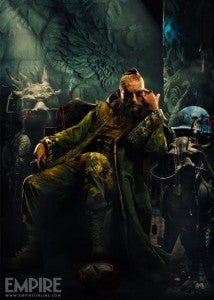 How does that work, considering that Kingsley's character turned out to be an impostor and his boss, Guy Pearce's Aldrich Killian, declared himself The Mandarin almost immediatley prior to his death?

Well, remember Trevor Slattery's claim that "I didn't tell him anything," when one of the security guards at the Mandarin compound asked him about his interactions with Tony Stark? Turns out there may have been a kernel of truth to that after all. Here's [a truncated version of] what LR has to say about Kingsley's next Marvel gig:

How is he going to set the record straight? That I don’t know. Who is going to play the real Mandarin? Don’t know either. Wait and see.

There's been a school of thought ever since the film was released that it was likely Slattery wasn't entirely honest--but most people thought Kingsley himself would turn out to be The Mandarin in a kind of double-switch. When he was taken into custody at the end of the film, though, it would seem to discredit that since even somebody pretty low on the totem pole would likely serve pretty hard time after kidnapping the U.S. President. If this is true, it makes a bit more sense than the idea of Kingsley's character as the secret mastermind...but it certainly begs the question: What of all those claims Marvel had about the latent racism of The Mandarin? Will they have yet a third "Mandarin" who isn't of Asian descent?

More on this as it develops. Don't expect to hear anything definitive until close to spring 2014, when Thor: The Dark World's DVD features start to be revealed.