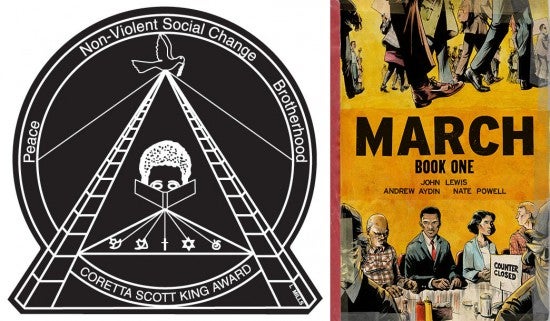 Top Shelf Productions announced today that March: Book One, the 2013 graphic novel from Congressman John Lewis, Andrew Aydin, and Nate Powell is a Coretta Scott King Honor Book. "I am deeply grateful for this recognition, and for the opportunity to help John Lewis share his story with a new generation ... ," Aydin told The Washington Post. "The enthusiastic response from readers and librarians has been overwhelming and humbling. I look forward to continuing our work bringing this important story to the page." Since 1970, the Coretta Scott King Book Awards have celebrated outstanding books for young people about the African American experience. The honor for March: Book One, the first in a planned trilogy of graphic novels in which Congressman Lewis recounts his astonishing life in the civil rights movement, is only the second time the CSK committee has selected a book in comics format. It marks the first Coretta Scott King honor for Lewis, Aydin, or Powell, as well as for publisher Top Shelf. March: Book One ended 2013 being listed among the year's best books by USA Today, The Washington Post, Publishers Weekly, and many more publications, and was recently selected by comic book retailers to receive Diamond Comic Distributors' Gem Award as Independent Graphic Novel of the Year. It is currently in its 21st week on the New York Times bestseller list.